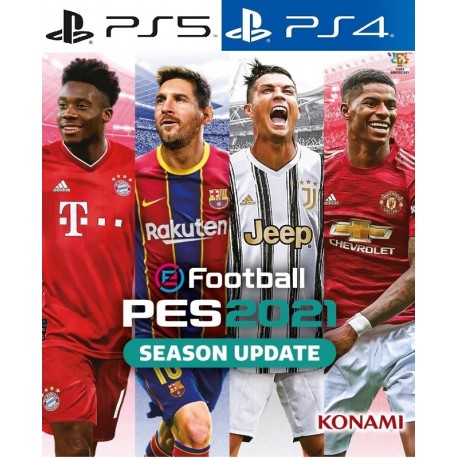 Celebrate 25 glorious years of PES with the eFootball PES 2021 Season Update, which is now available at our very special anniversary price. The updated edition of eFootball PES 2020 which was first launched back in September 2019 contains all the latest player data and full club rosters, it has got all the iconic award-winning gameplay that last year's edition became synonymous for, alongside a variety of team and player updates to update it for the new season, it also has a UEFA EURO 2020 mode, all this is at the greatly reduced special anniversary price! Play as some of the biggest clubs in the world including the German champions Bayern Munich, the champions of Spain Barcelona's exclusive PES partner Juventus and mid-table English Premier League team Manchester United. Then create your own unique team right from scratch and compete against fellow competitors from all over the world, play against others in special online PvP events that have been themed after real-life footballing rivalries and some other massive matches. Take control of your very own football club and lead them to the top of the league with the immersive Single Player mode.

Markedly Different from its Award-Winning Predecessor
I must admit that PES 2021 is probably the most risk that publishers Konami has ever released, when it was announced earlier in the year as an update of the edition from the year before, PES 2021 Season Update boasts the same familiar fun gameplay and modes from PES 2020, but it does add the new season's football kits, team squads, and transfers, now that might seem a little unconventional, but don't worry there is much more than it seems to enjoy about this latest edition. There is a certain comfortable feeling that you get when the game loads up, recognizable menus and similar modes but once you are on the pitch it is markedly different from its award-winning predecessor PES 2020 it does not take just a load of new modes that seem to be added for the sake of it to bring a freshness to a franchise as you will find the new on-pitch mechanics and the newly added extra myClub content makes PES 2021 just as inviting as any of the previous games in the long-running legendary series, especially when you take into account the very special price we have to celebrate their 25th anniversary.

Perform the Greatest Come Back in Injury Time
This is definitely not just a restyled PES 2020, the pace of the game is considerably slower, so you get a chance to show off your skills and timing instead of a panic-induced response, and the handling of your players is so much more responsive, making everything feels so much more intuitive, so the greatly modified AI creates a realistic experience for the offline gamers that they will really enjoy the quality of matches that are now available this year. The AI gives you the opportunity to dominate your competitor by allowing the opposition to make mistakes, a miss-hit volley, a heavy pass, or a miss-timed tackle really does make the game so much more realistic, while giving you those really special moments when you perform the greatest come back in injury time.