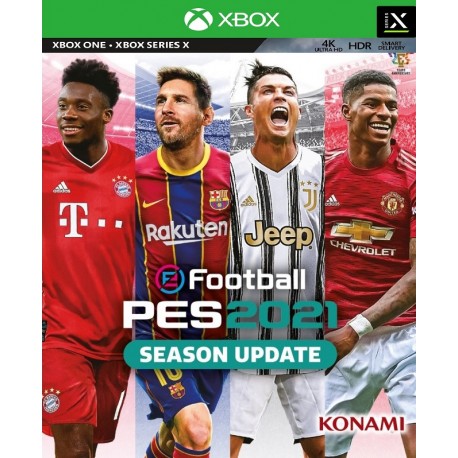 Celebrate 25 glorious years of PES with the eFootball PES 2021 Season Update, which is now on offer at our very own special anniversary price. This updated edition of eFootball PES 2020 which was first released way back in September 2019 contains all the latest player data and full club rosters, it features all the same award-winning gameplay that last year's edition was synonymous with along with a wide selection of team and player updates to prepare it for the new season, it also has a special UEFA EURO 2020 mode all this is at the greatly reduced special anniversary price! Play as some of the biggest clubs in the world that have teams like the German Champions Bayern Munich, the Champions of Spain Barcelona exclusive PES partners Juventus, and mid-table underperforming English Premier League team Manchester United. Then create your own unique team right from scratch and compete against fellow competitors from all over the world, play against others in special online PvP events that have been themed after real-life footballing rivalries and some other massive matches. Take control of your very own football club and lead them to the top of the league with the immersive Single Player mode.

A Complete Redesign of the Gameplay Mechanics
People have told me that PES 2021 is possibly the riskiest edition of the award-winning franchise that Konami has ever published, as soon as the announcement was made earlier this month of the update for the previous year's game There is something comfortably familiar about the enjoyable gameplay and the variety of modes that remind you of PES 2020, but there are loads of football kits for especially for the new season, team squads and recent transfers have also been updated, maybe you think that Konami has been skimping a bit, but fear not beneath the surface there is a lot of great new stuff for you to enjoy. As the game loads, you will immediately recognize the familiar menus and similar modes have only altered the background colors and not much else, but as you walk out onto the pitch for the first time you will really start to see the massive differences from the previous award-winning games. Sometimes improvements are not just about adding loads of new modes just for the sake of it, when a complete redesign of the gameplay mechanics can totally refresh the franchise, so when they created more new content for the popular myClub mode PES 2021 became just as enjoyable as any of the past games in the long-running franchise and with our 25th Anniversary editions Special low price it is even more appealing.