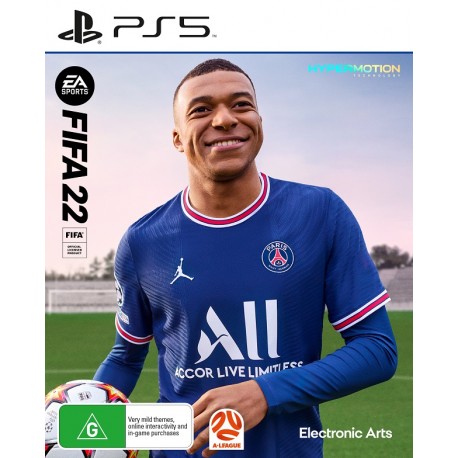 Powered by Football EA SPORTS FIFA 22 on PlayStation 5 moves the game forward with the groundbreaking next-gen HyperMotion technology that elevates every moment on the pitch.
HyperMotion integrates advanced full-team mocap data and machine learning to heighten the gameplay of every match in FIFA 22, harnessing the power of the next generation consoles to deliver the most realistic, responsive and fluid gameplay experience that they have ever built. FIFA 22 brings a new season of innovation across every mode in the game. Enjoy more consistency between the posts with a complete goalkeeper rewrite that brings more composure to the most vital position on the pitch. Live out your football dreams as you create and manage your custom club to glory in the fantastic Career Mode, get rewarded for your flair with restyled gameplay in VOLTA FOOTBALL, welcome back footballs most memorable players as FIFA Ultimate Team Heroes, and feel the atmosphere of the next big game with the most immersive match-day experience ever seen in EA SPORTS FIFA.

HyperMotion Technology
As is the way with EA SPORTS, every year they produce another outstanding addition to the world renowned franchise, and this year is no exception, HyperMotion technology gives the game a more realistic player for player rendering on the playing field. Powered by a full size 11 vs 11 motion capture which has recorded all the movement, elaborateness and those glorious in play reactions of real footballers in real games, this gives the players a whole new response from the players produced by over 4000 new animations that powers the Moment to Moment gameplay, that can make every game feel unique.

Vastly Increased the Difficulty Level
Gone of the days of trying to pass the opposition off the park like Barcelona in their prime, They have vastly increased the difficulty level needed to complete a short pass, if you are not facing in exactly the right direction when you are completing the maneuver you will more than likely be picked off by a pressing defender. Once you are in the box, everything becomes a lot more frenzied, with defenders throwing themselves in to block your shot.

The Create a Club Feature
The biggest improvements come in the way of FIFA 22's Career Mode, with the introduction of a Create a Club feature, you get to run the club from top to bottom, from designing both emblem and kit to Stadium, budget and selecting the board and then take the place of a team of your choosing in whichever league you wish. The player career mode has now got it's very own skill tree that that has branches covering Shooting, Dribbling and Physical, when you reach the appropriate level you will be rewarded by abilities that can boost both your and your teammate's performance.

Best Sports Game Out There
There is so much that is good about FIFA 22 from the enhanced graphics at 60 fps and 4k to the subtle change of emphasis in the gameplay or the new HyperMotion. EA SPORTS never let you down, they somehow always find a way to innovate and update what was already a brilliant game and lead it forward in a way no other franchise has managed to do. Furthermore, the tweaks made today bode well for the future. It goes without saying that FIFA 22 is the best sports game out there.