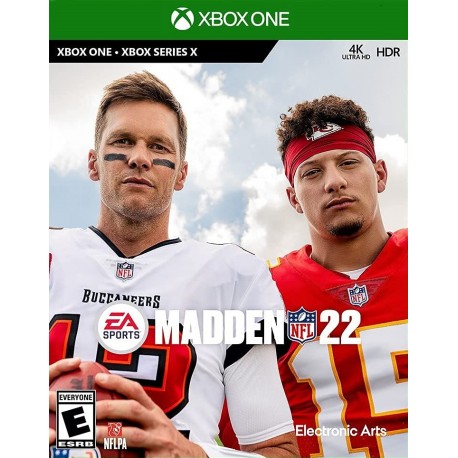 This is the XBOX One version that will run on Series X as well but with Xbox One specs.

The EA Sports oldest and most popular franchise, yes it is that time of year again when we await the latest offering from EA Sports to see what new things are being introduced in this season's edition. So when Madden NFL 22 was released we were excited to see the latest stats for each player and what updates and improvements have been made, this is the 40th edition of the game that has managed to hold its popularity throughout the years and has been played by generations. Enjoyed by a grandfather, father, and son, each spending some time engrossed in the realistic NFL action. It has come a long way in the many years of production, and even today is still making giant strides forward. With the latest version, there have been some impressive additions which we have listed below.

They Have Given it a Total Revamp
There has been a complete and much-requested overhaul of Franchise Mode that the gaming world has been asking for in previous editions, so it goes without saying that EA Sports deserve some credit for listening and providing us with the upgrades we have demanded. Instead of just tinkering with the game, they have given it a total revamp. Franchise Mode now has a realistic SIM experience. You literally become the owner of your club and have the responsibility of the day-to-day running of every single aspect of running a franchise. You will have to oversee the draft process, employ train and develop the support staff that is vital to a successful club, it will be up to you to appoint your head coach as well as the defensive and offensive coaches who you will be able by to improve by playing games that earn points to spend upgrading your coaches abilities.

The Presentation Has Been Improved
One of the most dramatic upgrades is the Dynamic Game Day System. It affects the gameplay via the direction of momentum as determined by the crowd, their influence on the game can be quite significant to the plays that you are making. When the crowd is against you, they can try to cause distractions thus delaying your audible plays, or can even stop you from reading the number of a player to make it harder to complete a pass. The presentation has been improved the stadiums have much greater detail and the dynamic fan reactions are realistic and sometimes humorous. There have also been improvements to the NextGen stats system.

Looks Clear and Precise
The good news is that all your old favorites are back with some spit and polish to smarten them up, The Yard, Superstar X-Factor, Face of the Franchise, and the popular favorite Madden Ultimate Team.There is a whole fresh sound system, the licensed music has a combination of hip hop and rock tracks to accompany the gameplay. The realistic on-field audio is great, you can actually feel the crowd roar and every big hit as they are made. The graphics have been upgraded for the Next-Gen consoles but even the Xbox One still looks clear and precise, even on a massive flat-screen television the picture is crystal clear. For those of you that have taken a break from the Madden NFL Franchise, it is a perfect time to return to the fold, with this fun new version. As always, EA Sports have taken a good game and made it great.