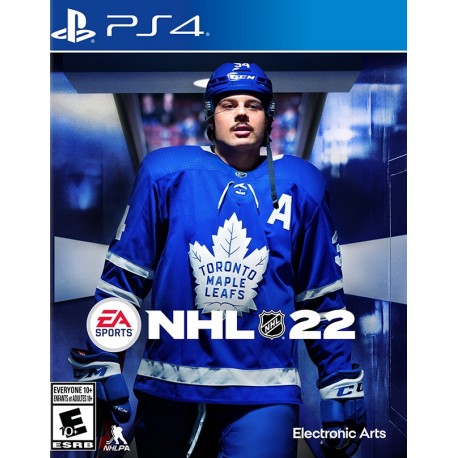 The Frostbite engine brings a massive visual upgrade to the PS4 that dramatically enhances realism. Key game stats and information are projected directly onto environmental surfaces in the game through an augmented reality-like visual package.
The all-new player animations exclusive to X-Factor abilities add more dynamic action on the ice during key moments like Pickups, Deflections, Protecting the Puck, and many more.
Superstar X-Factors allow you to unleash unique player abilities.
Players are assigned one Zone ability that defines them, giving them a more unique ability that sets them apart from the competition.
HUT is an NHL 22 game mode that allows you to create your fantasy lineup of NHL players, alumni, and icons and compete with the online. Build your own custom player and then compete across a variety of modes including EASHL, Ones and Threes arcade.
The Be A Pro experience gives you the chance to live the life of an NHL player, both on and off the ice. Build your dynasty across multiple seasons in Franchise Mode as you take the helm of your favorite NHL team or create the expansion team of your dreams.

Major X-factor
The focal point of NHL 22 on the PS4 is the X-Factor system, It is integrated into every one of the game modes, fundamentally it gives the elite players a score that reflects their specific skills sets and gives them a passive stat boost. From the one-timer of Ovechkin to Eichel's snapshot, principally they are skills that the player is special at. With both defensive and shooting prowess, plus one for movement/dekes and then also for goalies. So a player will get a bonus to their performance when they are in certain situations that they specialize in. each player has his own major X-factor plus some lesser ones as well, so as Eichel is about to crack his snapshot an icon will appear above his head and as he receives his boost for his X-Factor.

Grow and Evolve Your Player
In the Be A Pro career mode, where you play as a highly rated rookie who is drafted into his first NHL team, you can use the X-Factor system to grow and evolve your young player and to gain new abilities, and improve your statistics in the areas that you need to. There are new multi-years targets to keep the story going, with it no longer stopping at the end of the 2nd year as was the case in NHL 21.

For an intriguing and engrossing experience, the Franchise mode will allow you to take over the running of a team (or create your own expansion team) and lead them to the Stanley Cup, with some new additions the game is fluid and is very flexible by giving you the ability to control only the things that interest you in your day-to-day running of the franchise these elements include finance, player moral and even relocation.

Familiar Feeling to the Gameplay
NHL 22 has had a smooth change over to the Frostbite engine, it succeeds in uniting all the great stuff from last year's game while introducing the all-new X-Factor system which is a game-changer, having to reflect on different things while you play in Franchise mode or online. When you get onto the ice there is a lovely warm familiar feeling to the gameplay, but you will not fail to notice the new silky ice surface, the stick puck physics-based improvements, and at last, referees that let a little more go. EA Sports are experts in rejuvenating improving and enhancing your favorite sporting games and with NHL 22 they have surpassed themselves