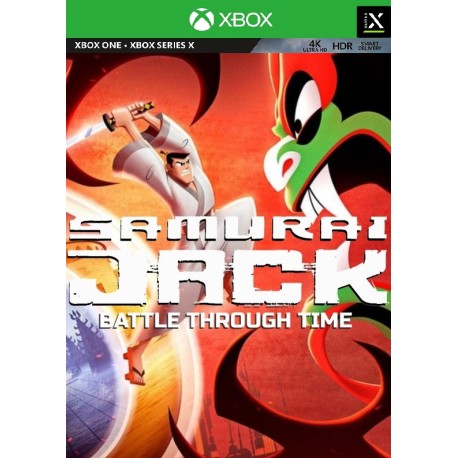 Assume the role of the legendary Samurai Jack, Who is surely the most powerful warrior of all time, join him on his journey through time as he tries to thwart the malignant empire of Aku in this addictive new adventure that is told by the co-creators of Samurai Jack. Voiced by the original cast, Samurai Jack Battles Through Time is a fun action platform game that is spread across all space and time and where your decisions in the game can create a new legend. A totally original adventure that links in with the enthralling series finale, team up with your trusted allies and have the confidence to go up against familiar foes. Discover the varying worlds and unforgettable moments from the popular series as you travel to a dark future to save humankind, and journey to the past to battle against devilish monsters. Discover your fate as you travel across time and space. Upgrade, master, and equip over twelve powerful weapons and use them in battle and increase your skills even more by training to upgrade and unlock new skills that will support your own individual playing style.

A Nostalgic Stroll Down Memory Lane
Can you believe it? The last time that a Samurai Jack game was released, it was on the Nintendo Game Cube. That was going way back to the year 2004, the game was titled Samurai Jack, The Shadow of Aku. This edition has a brand-new developer Soleil, who has done everything in their power to improve the Series from where their predecessors left off almost twenty years earlier Staying true to the original Adult Swim television series all your favorite voice talent make a welcome return to their accustomed roles, with the instantly recognizable vocal talent of Phil LaMarr bringing our hero Samurai Jack to life once more, John DiMaggio plays the iconic character of Scotsman and Tara Strong voices Ashi, who has the role of guiding Jack and leading him on his journey to find and eliminate once and for all the evil Aku, who is voiced by the talented Gregg Baldwin. For fans of the TV series, it will be a memorable stroll down the nostalgia road as you hack and slash your way through familiar locations, against familiar enemies.

So in Truth, you Get the Best of Both Worlds
Samurai Jack: Battle Through Time might be an homage to the iconic TV series by closely following the unique style of animation that we have become so familiar with, but despite that nostalgic feel the gameplay itself is anything but dated, the nine individually designed areas, from a graveyard to a bombed-out city that you will encounter along your fun-packed quest are all chocker block with aggressive adversaries, epic boss battles, and huge 30-1 encounters are incredibly and detailed, accurate copies of actual most popular TV scenarios from the Adult Swim series, but then the stunningly stylized graphics and the complex combo system are comparable to any next-gen game so in truth, you get the best of both worlds. It has all your favorite characters make an appearance from the show, so you get to welcome back well-known characters like Scotsman and Sir Rothchild the dog explorer, as well as the Witch Hag and the Imakandi tribe. So step back in time and enjoy the conclusion to the gripping, epic tale of Samurai Jack.