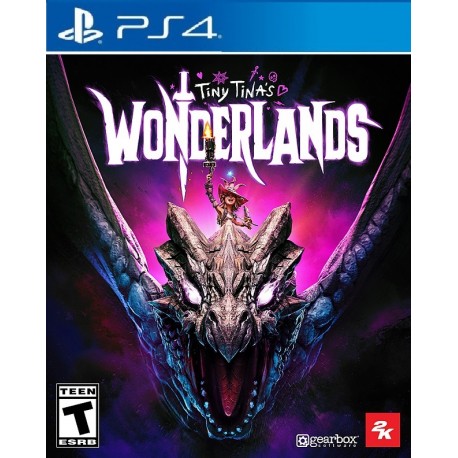 Set off on an epic journey full of adventure, humor, awe, oh, and some serious hard-core weaponry. Bullets, broadswords, and magic all collide with each other in this fabulous chaotic world that is brought to life by the erratic Tiny Tina, your unpredictable guide through this incredible table-top world where normal rules just don't apply. You can explore a vast realm of impressive gleaming cities, dark imposing mushroom forests a menacing fortress, and many more. Use your superpowered weapons and potent magic spells in this chaotic First-Person Shooter, it will take all the firepower you can get to dispose of the vast armies of enemies that include skeletons that give you backchat, sharks that hunt their prey on land, and impressive bosses, dig down into ominous dungeons that a packed full of big bundles of loot.

Create the Perfect Hero
Joining you on your quest to defeat the evil Dragon Lord there are such characters as the obstinate Captain Valentine and a rule-abiding robot called Frette plus some pretty incredible characters such as the minstrel Bardbarian and the enigmatic Fairy Punchfather, The detailed customization allows you to create the perfect hero using the six skill trees in the multi-class system to combine the different abilities, level up, expand your impressive arsenal, and become the ultimate warrior. In the Multiplayer Mode, you can team up with 3 of your mates seamlessly online or on a local split-screen game where you can either split your spoils or compete to see who can grab the most loot.

Laugh Out Loud Funny
Tiny Tina's Wonderlands is a direct follow-up to Borderlands 2 Tiny Tina's Assault on Dragon Keep, Wonderlands is a simulated role-playing table-top campaign that goes by the name Bunkers and Badasses, it is a bit like an absurd version of the fantasy board game Dungeons and Dragons, full of gratuitous violence, loads of destructive weapons, and some hilarious comedic and unforgettable moments. There is an impressive star-studded voice cast, Ashley Burch once again plays the objectionable Tina, the sensationally talented Will Arnett joins the A list cast as our incredibly evil bad guy the Dragon Lord, the lovely Wanda Sykes plays the obsessive-compulsive Frette, Andy Samberg from Brooklyn Nine-Nine is Captain Valentine the over-eager, dumb member of our ridiculous group and once again Chris Rager returns as Mister Torgue the Bardbarian. There are some seriously famous actors showing off their Hollywood renowned talents in this game, The writing is brilliant and is genuinely side-splitting and ludicrously funny.

Genuinely a Great Game
If I was to describe my perfect game it would have intuitive gameplay, sharp and stunning graphics along with a Terry Pratchett style storyline that has forgotten to take its tablets, likable and enigmatic characters are portrayed by world-famous award-winning acting talent, Tiny Tina's Wonderlands has all of these by the bucket load, it is genuinely a great game a worthy successor to the Borderlands franchise. 2K games have not skimped on the content and have been faithful to its predecessors. It is well worth every penny.