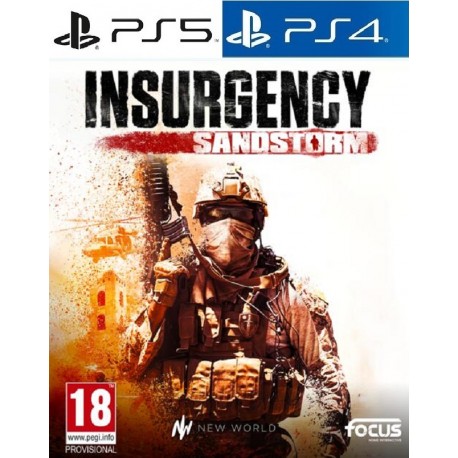 Immerse yourself in modern realistic gunfights with the ultimate tactical First-person Shooters designed for your console by New World Interactive. Fight in the desolate arenas of contemporary conflict through intense cooperative and combative multiplayer modes. With unrivaled immersion, feel every bullet and fear every impact in fierce close-quarter combat.
Deaths are fast, manage your ammunition well, and use tactics and team play to go through the scenarios in search of victory. Coordinate fire support with your team and fight shoulder to shoulder in gripping action.

New World Interactive, the developers of Insurgency: Sandstorm have taken on the big boys of FPS and given them a run for their money, They have finally brought the terrifying reality of modern warfare to PS4 and PS5, unlike similar games, Insurgency: Sandstorm makes you value your player's life thus making the battle environment a more cautious and nerve wracking experience, with up close combat unseen in the FPS genre.

Incredible Sound Design
One of the best innovations of Insurgency: Sandstorm is the incredible sound design, the detail is astounding and allows you to locate the direction that your enemy is advancing, detect the direction of the amazingly realistic gunfire that you are coming under as the shots whistle past you, and the explosions will literally ring in your ears, you can even hear the footsteps outside the room that you are clearing of combatants. So much hard work has been put into creating a totally convincing and true-to-life encounter using high-quality sound unlike any that you have had the pleasure of experiencing before.

Self Restraint and Calmness Wins Hands Down
Patience and tactics come to the fore in Insurgency: Sandstorm So if you go charging into any situation without first assessing the situation, you are bound to go down in a blaze of glory as the simple fact is that it only takes one shot to take you out of the game and put you in the graveyard. Self-restraint and calmness will beat a crack shot every time. Every Iraq-style map has a knife-edge feel about it where every way in and out of a scenario must be planned out using flanking maneuvers, choke points, and pincer movements to strategically coordinate with your squad-mates while engaging the opposition for any chance of victory.

A Brilliant Inventory of Weapons and Gadgets
Insurgency: Sandstorm by New World Interactive is fundamentally one of the most authentically realistic First-Person Shooters available on both the PlayStation platforms for quite a long while and gives the big boys a good run for their money, unlike a lot of FPS games it is not all about dash and shoot but strategy, tactics and accuracy, they all play a major role in having success throughout the gameplay. It has some very worthwhile Multiplayer modes and an AI that will both excite and frustrate. Superb audio and graphics with a high frame rate and resolution. A brilliant inventory of weapons and gadgets. Insurgency: Sandstorm impresses on its first console outing, and things bode well for the future of the franchise.