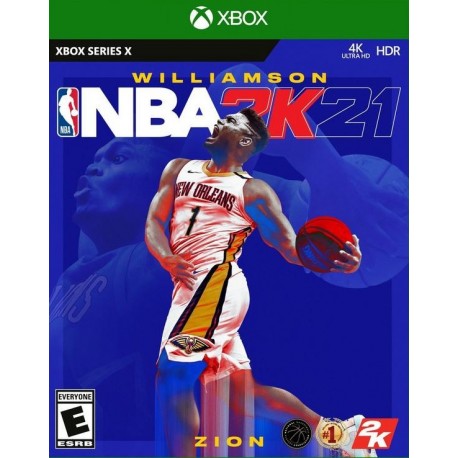 As the latest in the series of the legendary, best-selling NBA 2K series, NBA 2K21 stands out and uses the next-gen innovations. It features fantastic extensive upgrades of its superior graphics and gameplay, Online competitions and community features plus great deep game modes, offering a one-off look into the game and culture of basketball, where the game is everything.

A Tougher, More Flowing Game
NBA 2K has never felt so smooth, moved so well, and felt so good. With next-gen player motion technology, the movement is more fluid, reactive, and decisive all over the court, the introduction of an impact engine will give you a sense of physicality that has never been seen in the NBA 2K franchise, unlike before you can give and receive hard contact both above and underneath the rim. Completely new ways of handling and passing the ball are now unlocked with the Advanced Pro Stick.

MyCAREER
Set off on the individual journey that guides you through a new cinematic basketball storyline called The Long Shadow. Steer your custom-made MyPLAYER character through high school and pick between an officially licensed college experience or go straight into pros with any of the 28 G league teams as you strive for the NBA as your destiny awaits.

Your Dream Team
Compete by collecting fantasy cards and playing against the global NBA2K community, create your unique all-time fantasy lineup with great players old and new, A new feature for 2K21 is limited-time seasons offer individual rewards as you face the challenging MyTeam mode.

Introducing the W
The WNBA experience has been greatly expanded since its introduction last year, the W is the first-ever WNBA MyPlayer mode for the NBA 2K franchise. Create and customize your very own WNBA player and go with her through a realistic pro career that features all the 12 WNBA teams and all the league's shining stars. Enjoy going head-to-head with the experience of online W mode that features 3 on 3 MyPLAYER competitions played on a stunning new court that was designed exclusively for the game mode.

Enjoy the Revamped League management with MyNBA
This is your NBA and with your franchise mode you will have an unprecedented amount of control over every aspect of the game, you can expand your league to 36 teams or even reduce it to 12, examine and control player growth through the boom/bust system then share your unique setups and scenarios with the NBA community. Dress like a real baller, look the part from head to toe with new stylized clothing and sneaker drops from all of your favorite iconic apparel, accessory, and shoe brands, and play ball while indulging in the dynamic 2K21 music score for next-gen, boasting one of the largest soundtracks in the history of gaming.

Packed Full of Different Fascinating Modes
In summation, this is a death and taxes game, you know that it will appear every year, and you are certain that it will not disappoint. Packed full of different fascinating modes including both NBA and WNBA MyPLAYER, MyTEAM, MyCAREER, and MyNBA all improved to make full use of the powerful Xbox Series X console which produces fantastic realistic graphics, stunning lighting, and detail, a wonderful extensive soundtrack. Get on the court and show the community what you have got.