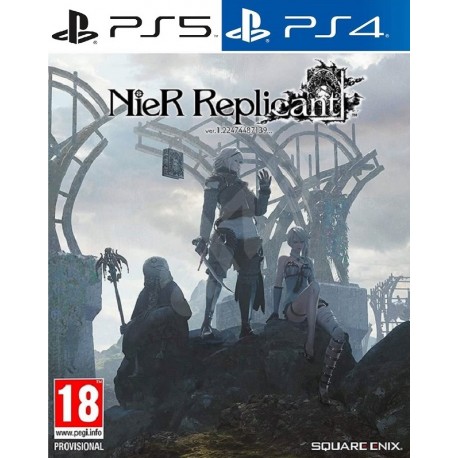 Originally released in Japan and later in the west with the alternative title NieR Gestalt for the PlayStation 3, NieR Replicant ver.1.22474487139 tells the same story but this time the main protagonist is not a father desperately trying to save his daughter, instead, it is a devoted brother NieR fighting to save his sister Yonah from the mysterious illness known as the Black Scrawl. The support he receives comes in the form of Kanie, who herself is infected with the Black Scrawl, but that doesn't stop her from being an obscene talking monster eliminator. Grimoire Weiss is a magical book that talks about who holds the key to curing the deadly Black Scrawl if only he could understand just how to do it finally, Emil, a young boy that has the ability to change any organic material into stone. You can enjoy playing as each of these enigmatic characters at certain times during the story.

The Human Race on its Last Legs
In the dystopian world of NieR see the human race on its last legs, the remnants of the surviving populace have constructed small towns that you will visit to seek answers to how to cure the plague that is devastating the people. You will be sent on side missions to either fetch something or kill someone as requested to earn new weapons, rewards and to unlock certain locations these locations as green pastures, a rubbish dump, and an arid desert, all have wildlife to hunt for raw materials, places to fish and places to mine metals, but they are also full of Shade, they are the main enemies for you to defeat, and they come at you in numbers that make destroying them no easy feat.

Smooth, Fluid, and Fun Controls
It has to be said that the biggest and best overhaul is the combat mechanics, I always found the original slow, clunky and unresponsive, which was to be honest, frustrating at least. Compare that with the smooth, fluid, and fun controls that now standout with NieR Replicant ver.1.22474487139 dodging an attack when you time it to perfection or deflecting a blow just as it is about to land is most satisfying with these amazing improvements the gameplay brings the game up to date with modern standards. Grimoire Weiss can provide you magical support which can be used for melee attacks or as I prefer the long-range assaults available like spears launch or energy blasts to keep your enemies at bay. The system grants you passive abilities that upgrade your weapons and Grimoire's magical attacks. When you defeat Shades, you free up words that increase your physical damage or the rate of the item drops so that you can obtain those more unique items that have evaded you. Especially enjoyable and testing are the incredible boss fight, each is individual and requires you to work out which type of attack is effective against each boss.

The Way it Was Meant to be Enjoyed
With stunning visual upgrades from the original PlayStation 3 game NieR Replicant ver.1.22474487139 works brilliantly on both the PS4 and PS5, with a great voice acting cast and a brilliant soundtrack that is both comparable to any game on the market, every track is memorable, and the well-written script only adds to the total experience. So take this opportunity to savor a classic title in the way that it was meant to be enjoyed.