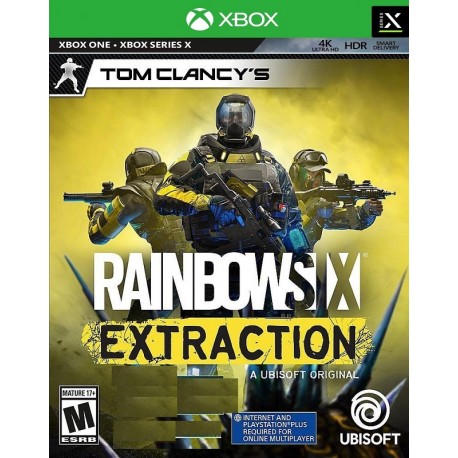 Your team is your best weapon! Join millions of players in Tom Clancy’s Rainbow Six, Extraction is a 1-3 player cooperative PvE FPS. Where you unite elite Rainbow Six Siege Operators against a deadly alien threat known as the Archaeans. Assemble your team, coordinate your assault, and risk it all to make sure no one is left behind. Join forces online with a squad of up to three players, with full platform and save compatibility. With unlimited ways to customize your line-up, you will need a well-rounded team, knowledge of your enemy, and unwavering cooperation to come out on top.

18 Specialized Operators
Learn and master the unique gameplay, weaponry, and skills of 18 specialized operators in a deep progressive system. For the first time, you can upgrade their gear, improve their stats, and access unique load-out options and powerful combat perks. Unlocking new adventures along the way. All 12 containment zones that are spread across the United States are controlled by the Alien parasite, creating an unstable ecosystem within its walls. With each game, enemy locations, objective details, and map features change, forcing your team to adapt rapidly.

3 Tricky Objectives
Tom Clancy’s Rainbow Six Extraction has four incredible zones, split up into 12 main levels, you and your compatriots will select your characters and then be airdropped into the conflict zone, where you will be required to finish off 3 tricky objectives. For example, you may have to save and extract a civilian in danger or destroy all the hives at a certain location, or take down a meaty destructive Archaean by using cunning to entrap him. There are varied and imaginative assignments for you to complete.

Tom Clancy’s Rainbow Six's Most Feared Operators
You will get to pick from some of Tom Clancy’s Rainbow six's most feared operators such as ELA, her tactical expertise, her unparalleled talents as a survivalist, and her GRZMOT concussive mines are a huge asset when facing the Archaeans. VIGIL who specializes in electronic and electrical engineering, his stealth technology, the ERC(Electronic rendering cloak), gives Vigil a distinct tactical advantage when engaging the Archaeans and DOC, Who understands that in battle, the best medicine is often weapon fire superiority DOC's skill as a medic and is matched only by his tactical expertise and his commitment to seeing the Archaean threat completely neutralized. His STIM pistol provides instantaneous healing and revitalization to himself and his teammates.

A Fantastically Grizzly and Malformed World
With 19 elite operators to choose from and over 20 special gadgets at your disposal Rainbow Six Extraction is one of the most creative and varied gameplay that UBISOFT has ever attempted, gone is the realistic military-based genre and say hello to the fantastic, grizzly and malformed world and slimy walls and floors of the parasite incursion. Imagine the desolation of returning to a failed mission scene to pry the battered body of one of your downed companions will always be one of the most intoxicating, reflective, emotional missions you will have ever faced in Tom Clancy’s Rainbow Six series of FPS games.