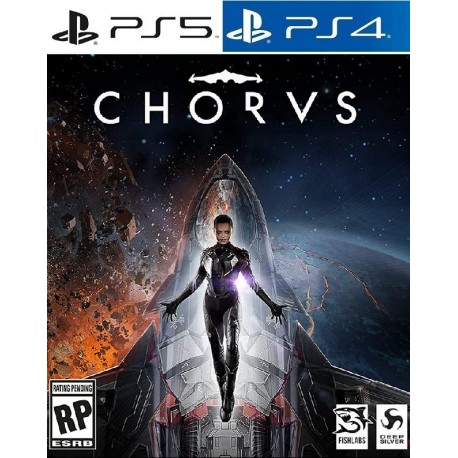 Accompany Nara on her mission and help her destroy the dark sect that created her. She can unlock devastating weapons and her prodigious abilities in a true evolution of classic ship games. Together with forsaken, her sentient star-fighter, you'll get to explore ancient temples, engage in thrilling zero-gravity battles and venture into a place beyond our reality.

A Journey of Redemption
Follow Nara as she confronts her troubled past. Travel the galaxy and cross the borders of reality to unite the forces that are still desperately trying to resist the attacks of the Circle and their leader, the Great Profit.

Adventure Beyond the Void
Enter a dark new universe, full of life and conflict. Explore awe-inspiring locations like a bustling space stations and strange planes of existence. Fight fierce combat in zero gravity, whether in epic cosmic landscapes or narrow glass passages. Chorus offers you the balance between the huge scale and spectacle of space exploration, and the faster paced, more frantic action.

One pilot, One Ship, One Living Weapon
get powerful and varied weapons and combat upgrades. Master your ship's fluid mechanics and Nara's deadly mental abilities, such as, teleportation, and telekinesis, to subdue massive hordes of enemies and take down gigantic battleships. Chain your powers together to create the ultimate living weapon.

Stunningly Detailed
Chorus is a visually amazing and quite beautiful game. Even though it is set in space the game is visually as you traverse in, over and under stunningly detailed temples, planets cities and even the rocks are detailed and sharp. While the PS4 delivers a credible 30fps the PS5 produces an outstanding 60fps, both have remarkable graphics on a 4K TV and are smooth and tight and to be honest damned impressive. In Photo mode you are able to grab some of the extraordinary images that Chorus is famous for, you can gain access to the feature through the menu and snap away and take high quality pictures of the phenomenal backgrounds.

Possess Incredible Special Powers
You play as Nara the Chosen One of the Great prophet, a superior commander of a corps d'elite, you and your fellow pilots, christened the Elders are enforcers for a sect known as the Circle. You and your squadron possess incredible special powers that give them amazing abilities which normally lay dormant within themselves. Using their destructive talents to battle,The Faceless, a rebel faction that also posses similar qualities, who you must eliminate if you are to finally bring peace to a conflicted galaxy.

Destruction of an Entire Planet
As the war dragged on there was a darkening of their souls and nothing would stop them achieving their aim, no matter how many innocent lives they had to take to do so. After you bear witness to your destruction of an entire planet, killing billions of people in the process. The inner turmoil inside yourself finally bring the reality of what you have done becomes too much, and you flee, as far away from the Circle as you can get.

Chorus is one of the best space combat games ever created, with exciting and testing dogfights, an open world feel and loads of new abilities and upgrades for you to earn as you restore the balance to the cosmos. Join Nara and Forsa in their search for retribution, revenge and absolution.