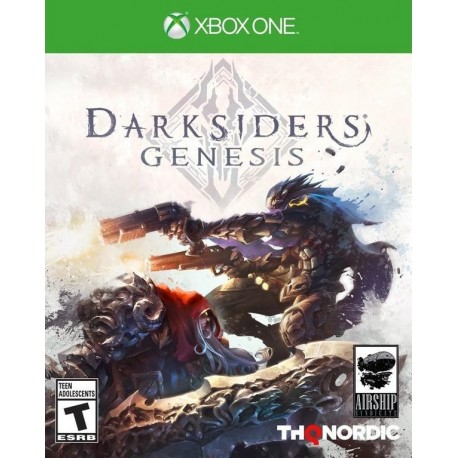 Darksiders: Genesis is a "hack and slash" action-adventure video game developed by Airship Syndicate and published by THQ Nordic for Microsoft Windows and Google Stadia on 5 December 2019, and Xbox Series X|S & Xbox One One, and PlayStation 4, and Nintendo Switch on 14 February 2020. Darksiders series has a particular universe, centered on the Four Horseman of the Apocalypse: War, Death, Fury, and Strife. The game is a prequel – “Genesis” – and a spin-off, but even if it is not one of the main games of the franchise, it has its importance in the world of Darksiders. From the story point of view, it presents important events that took place before the original game and introduce for the first time Strife. In terms of gameplay, it introduces a new combat gameplay style.
Let’s start with the story. The events in Genesis are taken place after the Four Horseman of Apocalypse punished the Nephilim in the Eden. The Council, have got wind that something may happen soon that may upset the balance between the realms – Heaven, Earth, and Hell. They send two of the Horseman to investigate: War and Strife. From here on, players are taken into an epic battle that begins.
Players will play with Strife and War and are able to switch between the two at any time. When playing multiplayer, each player will assume the role of one of the characters and play cooperatively. War is recognizable from the past games, his weapon is its sword – Chaos Eater. We recognize here the traditional style of the fighting, hack, and slash, with close melee and combos. However, Strife is using its two pistols – Mercy and Redemption. As a result, the gameplay offers now a shooting perspective, as Strife is able to kill enemies from a safe distance. The pair is redoubtable because each character has a different combat skill and they complement each other.
Genesis offers action, shooting, hack and slash combat, exploration, puzzles, and platforming. It is a Diablo-style kind of video game, but it is not a loot game. If players kill enough enemies, they will have burst abilities, meaning they will be able to take down foes much faster. Some items will allow access to hidden areas. Some other collectibles are spread all over the map, encouraging exploration. But the most important thing is to collect souls, that are dropped randomly when any of the Horseman kill demons. The souls will increase strength, speed, and wrath.
Darksiders Genesis may be a spin-off, and compared with previous games is shorter, but the new combat style and the co-op gameplay bring something new that is worth exploring. It is a side story in the Darksiders saga, but it is an important side story, more personal and with deep narrative implications. The gameplay is fun and chaotic, the mix of gun-based shooting and melee combat is excellent, guaranteeing players many hours of fun. In addition, Genesis has big replay value, and a right balance of action role-playing game and puzzle platformer mechanics. It can be played single-player, with only one character on screen (but you can switch between characters, as mentioned), or multiplayer two-players locally or online – in this case, players can switch their characters if both agree.