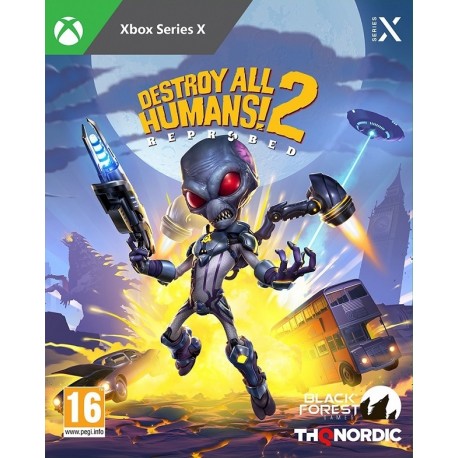 Let me take you back in time to the halcyon days of the original Xbox, when out of the gloom of FIFA and other serious video game titles came the irreverent and downright whacky Destroy All Humans! Yes, it was a time when men were men, women were women and video games had quirky titles and no respect for political correctness or the modern-day sensibilities. It is the sort of game that has been longed for as modern games have adopted an art house, serious, foreboding tone that seems to be the norm for the current batch of open-world and JRPG games. With a name like Crypto you may think that our protagonist was a cyber dealer, luckily he has nothing to do with Bitcoin or any of the other digital currencies that it spawned. The original Crypto was a foul-mouthed, profane little alien who came to earth with just one thing in mind, conquer the world and steal the DNA from the human race. After remaking the first game in the franchise and the success that it brought back in 2020, Black Forest has now released Destroy All Humans! 2 – Reprobed, the game is so faithful to the PS2 game that there is a disclaimer at the beginning of the game warning of what is now considered racism, (using two white actors to voice very cliché and almost offensive versions of Japanese men may come under that category), misogyny by the bucket load and some very poor jokes indeed.

Destroying Everything in your Path, Blasting it all to Dust
Firstly Black Forest has created a new and much-improved adaption of the game, but as a remake, the game has stayed faithful to the initial release but does feature a brand-new system engine and great-looking new textures and modernized models changing the graphics from clunky cartoonish cutscenes to blockbuster, highly detailed, high definition Pixar type animations. It is quite outstanding the difference that it makes. As you traverse the major world cities that they have created, take a second to admire the stunning views, wonderful lighting, shadows, and shading before charging in and destroying everything in your path, blasting it all to dust. Destroy All Humans! 2 – Reprobed is a classic open-world action game in all senses of the word, while Destroy All Humans! was set in the paranoid 1950s of McCarthy and a UFO-obsessed American public, Destroy All Humans! 2 – Reprobed jumps forward 10 years to the loved-up 1960s of free love, hippies, and crass humor, the missions are not overlong and with the advanced alien weaponry that you collect and upgrade along the way there is a certain pleasure that you get as you suck out brains and hurl a hippie for miles, every level also has an optional mission as well, such as killing a selected amount of cops that will give you extra upgrade resources. The missions are never staid, repetitive, or boring and locations like London, Japan, San Francisco, and even the moon are fun to explore and even more fun to destroy. Maybe the humor has not dated very well, but that is a major part of its appeal for those longing for more innocent times.