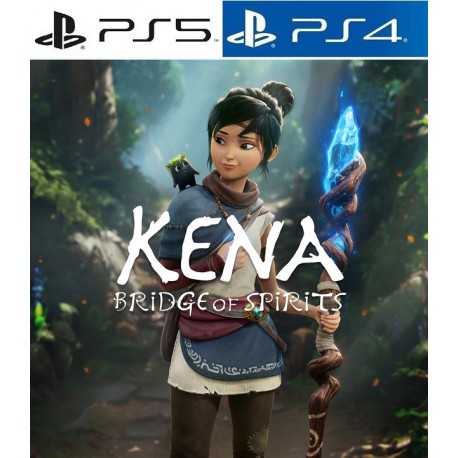 Not many games can be described as having stunningly beautiful action-adventure, Kena: Bridge of Spirits is the exception to the rule, it also has wonderful Balinese style music to enchant you with. You will find it unbelievable that this is developer Ember Lab very first outing but, with their history of digital animation that has enabled them to create a game that has fast-paced combat, rewards you for your discovery and a voice cast of such memorable characters. For those of you that love interconnected worlds that are ripe for exploration, portrayed in such a lavish and sumptuous way.

Totally Transform the Environment
Search for and collect Rot to increase your powerful abilities, whilst discovering items that will totally transform the environment. There is a Forgotten Village for you to explore and uncover a strange curse, all the time drawing on the Spirit Realms' powers to assist you in restoring this once great world. Use fast-paced combat to take on corrupted spirits who are trapped in this world and unable to move on, as they challenge Kena every step of the way.
So, unlock the mystery of the Rot, adorable curious little critters that act as sidekicks to Kena and leave you asking the questions What are they? Where did they arrive from? And what can they do to help restore their corrupted homes?

The Ultra Cute Rot
The Rot are the stars of the game and bring a tactical aspect to Kena: Bridge of Spirits. By discovering them, getting them to power up and using them efficiently, you will add a level of strategic gameplay to the mix, As the ultra-cute Rot are quite small you will have to build up their courage before you can utilize them effectively, by taking down and destroying enemies your meter starts to fill up when the level is sufficient you unlock the power of a Rot action, choose from a variety of actions that the Rot can fulfill. Deploy them in a fight, they are great at distracting an enemy allowing you to get a few swift cheap blows in on a weak spot as the corrupted spirit is left bemused by the onslaught of Rot, or you can use them to power up one of your special moves to deliver a crushing blow and of course the only way to neutralize the heart is to send the brave Rot in there to do it for you.

The Most Beautiful and Emotional Game
Ember Lab have used all of their acquired knowledge from the animation that they have excelled at and produced one of the most beautiful and emotional games that I have ever played. Charming likable characters, stunning environments, surprisingly difficult combat that will constantly test your fighting skills, and puzzles that will both fascinate and captivate you. Unlike any other game in the genre, Kena: Bridge of Spirits is more about healing and freeing the corrupted spirits from the pain that they are suffering more than just running around and bashing everything in sight (but there is still plenty of bashing), with an immaculately portrayed world for you to discover that now comes in stunning 4K, which makes the game bright and clear. So, join Kena and the lovable Rot as she journeys to guide the tortured spirits of the villagers and free them from the pain that has engulfed them and is stopping them from moving on. Kena: Bridge of Spirits has passion, and action and is very moving.