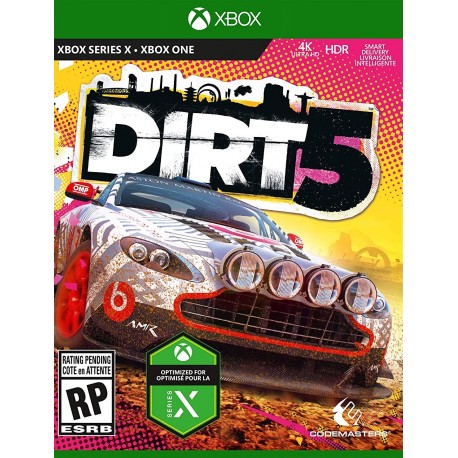 Welcome to the bold new off-road racing experience from the masters of racing SIMs Codemasters, Blaze a trail across some of the most iconic routes in the world, drive any of the massive roster of vehicles that are synonymous with the Dirt franchise, from legendary rally cars to supped-up trucks, to GT heroes and more. Enjoy the star-studded career, four-player split screens, innovative online action, and totally new Playgrounds' arena creator mode, Dirt 5 is the next generation of extreme off-road racing.

Completely Fresh Approach to Both the Style and Culture
The DIRT series of games have now evolved, but it still keeps all the vital DNA and heritage that has made it one of the best racing SIMs series. DIRT 5 is the gold standard and will lead the way forward for the franchise and make it the future of racing Simulations. Braver, bolder, and better than any of its predecessors it has great new ideas, brand-new innovations, and some very special new features to enjoy, it has taken a completely fresh approach to both the style and culture of a fantastic off-road racing hub, playing the game will give you an unbeatable amount of classic highlight-reel moments. The next-generation play only a small part of the improvements that Codemasters have made to DIRT 5 and considering that they have such a great reputation as the very best producers of racing games throughout the whole genre, they are known for pushing the boundaries of what is possible as they strive for an exciting and realistic experience.

The Best Feature is the Career Mode
This like any other racing game the best feature is the Career mode and DIRT 5 has it as its central theme. So Codemasters have gone all out to attract some of the most prodigious vocal talent around, so it comes as no surprise that they have brought in such gaming stars as Nolan North who voices the Bristly veteran driver Bruno Durand who is straight-talking and has no time for the niceties, real-life podcasters James Pumphrey and Nolan Sykes bring their great chemistry to the game, as they continually bounce off each other with what almost seems like improvised banter, and of course, you cannot forget your guide and mentor throughout the game, Alex AJ Janicek who is voiced by the in-demand talents of Troy Baker, so as you can see they have spared no expense on getting the story across to the player genuinely and realistically.

Dirt 5 Looks Wonderful, with Visually Stunning Environments
Dirt 5 actually comes into its own when you play the online gaming, unsurprisingly no matter what time of day or night it is, you will never struggle to find yourself an opponent to compete against, Codemasters has provided a thriving online community, whether you choose the Races option and the really fun, invite your friends to a Party option. DIRT 5 looks wonderful, with visually stunning environments and vehicles that are vibrant and realistic in design. The audio sound effects and licensed music, including tunes from such greats as Stormzy, The Prodigy, Pearl Jam and the queen of disco that is Chaka Khan is fantastic and as was previously mentioned before, the well-written script is performed by some of the best gaming voice talents about. You will probably want to spend most of your time racing some of the fastest, best looking, most desirable vehicles that are available in any racing game and learning the subtleties of handling that can make all the difference between flipping over and over as your ride disintegrates around you and taking the lead by our breaking your competitor at just the right moment. For real racing fans, this is a must-have game with hours of entertaining fun.