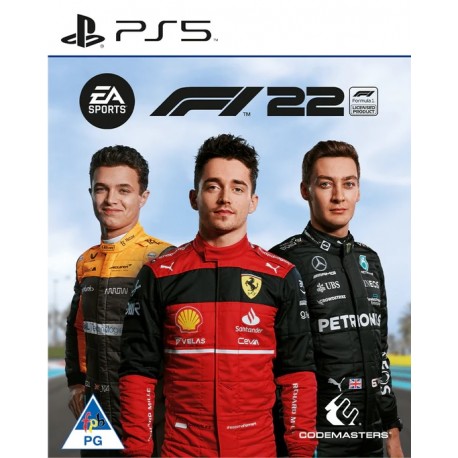 There is a wind of change sweeping across F1, after years of dominance by the unstoppable Lewis Hamilton and his incredible Mercedes team, there is a new kid in town and boy has he stepped up his game, Max Verstappen's Red Bull has become the car to beat, young drivers like Leclerc and Sainz are now the in-form drivers to Challenge Max Verstappen for the F1 World Championship, leaving the old guard to ponder their position in the bigger scheme of things. F1 22 for the PS5 reflects both this and the new car regulations that have come into force this season, which have both had a big influence on the game in their way. The handling of the cars has noticeably changed from last year's offering the Red Bull and the Ferrari being the cars to have, while the Mercedes has dropped dramatically down the pecking order.

Ferrari, not Red Bull is the Fastest Car
To demonstrate how vast the changes in the speed and handling of the cars are this season I have found the lap times for each team around a virtual Silverstone and the order might surprise you, Ferrari not the Red Bull is the fastest car at 1.29.934 with the Red Bull a couple of hundreds behind on 1.30.119, the real shock comes as the Alpine easily outperforms the Mercedes for third on the grid with a rapid 1.30.132 compared to the 1.30.425 of the Mercedes, Alpha Tauri, the Red Bull B team comes in 5th at a respectable 1.30.533 closely followed by Alfa Romeo on 1.30.556, and the Haas right behind them with a 1.30.557 takes 7th, the Williams drops dramatically to a disappointing 8th scoring 1.30.788 and bringing up the rear of the grid is McLaren and Aston Martin who posted times of 1.30.811 and 1.30.852 respectively. As you can see, teams like Mercedes, McLaren, and Williams are far from the competitive cars that we saw last season, with Codemasters suggesting that the new designs and regulations will affect these teams more than others.

The Cars Feel at Their Best and Their Most Enjoyable to Drive
The choice is one of the major features with F1 22, the ability to start your career in F2 or F1 cars, for those of you who have not got the time to spend on the game that you would like My Team allows you to start either from scratch, in a mid-field team, or as a front-runner, giving you the freedom to invest the amount of time that you have available, in-fact there are a plethora of options, so you can alter your experience at will, a F1 begginer can turn on all kinds of assists to make the game accessible or for the competitive racer turn off the assists to prove yourself in the race. Pick your very own style of racing and feel the difference in handling that you get with each mode. In the Time Trial and the Online modes, the cars feel at their best and at their most enjoyable to drive.