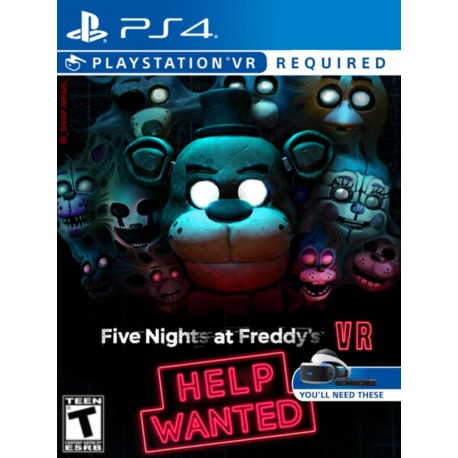 The future is here, with the experience of VR games and a whole new world that they create. Enjoy the real feelings and put your mind and body in the story of Five Nights at Freddy’s VR: Help Wanted. The series consists of some classical mini-games that emerge from the five nights universe. You now have to survive and make the most possible out of your like in the conditions that are now given.

It can be terrifying and at the same time really fun to live and feel another imaginary world as it was your own. The story is captivating and presents you with the encounter of your favorite killer in a collection and symbiosis of the old and the new. The aim here is not to abandon the past altogether, but to select all that is good and reliable and pleasant from our past experiences and adapt and transfer skills into the new enhanced reality that everyone is experiencing.

Do you feel old yet? Well, this is a taste of the future and the funeral of PC gaming, since PS4 & PS5 has taken it to the next level.

VR Games may cause some players to experience motion sickness.
Enjoy a collection of new and classic FIVE NIGHTS AT FREDDY’S™ adventures. “Where fantasy and fun come to life!”

YOU’RE HIRED - This is the time when your abilities and skills are meant to be seen. All that you do, at all times, be it on your laptop is monitored carefully and analyzed to make a schedule that suits the "higher" power.  It is Time to get your hands dirty. Repair claustrophobic ventilation systems, troubleshoot broken animatronics that could activate at any moment, or spend your evenings cowering in the nighttime security guard office.