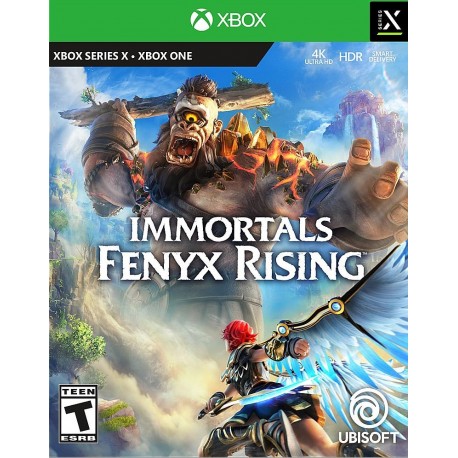 Mythology is brought to life in this great adventure, Immortals Fenyx Rising. Taking on the role of Fenyx, a new winged demigod, he is on a vital quest to be the savior of the gods of Ancient Greece. The fate of the world is in his hands, and he is god's last hope. You will use the powers of the gods, wield the sword of Achilles, or unleash the wings of Daedalus to battle powerful enemies and solve ancient puzzles. Conquer some of the Greek Mythology's most iconic monsters like the Cyclops and Medusa in intense combat on land and in the air. Use your skills and various weapons such as telekinesis, self-guided arrows, or other brutal attacks that can cause devastating damage. A Stylized open world that has seven individual areas, each of which is inspired by a different god, is yours to explore and discover.

Follows the Adventures of Fenyx
Ancient Greece is rich in Mythology and has been used in many video games and created many a memorable fantasy adventure. The team behind Immortals Fenyx Rising, Ubisoft is also the development team behind Assassin's Creed Odyssey, but unlike the more serious Odyssey, Immortals Fenyx Rising likes to concentrate more on the fantastical elements and portrays the most famous Greek Mythology characters more light-heartedly and is a lot more humorous than anything that Ubisoft has published recently. The plot follows the adventures of Fenyx a shield-bearer who after a shipwreck wakes on the shore of a strange Island that we later discover is called the Golden Isle. While searching for his remaining crew he discovers that the majority of his shipmates have been turned to stone, in an attempt to find out what has happened and why the world has been thrown into chaos, after a chance meeting with Hermes he is told that Typhon has defeated the Greek gods and only Fenyx has the power to defeat him.

Prometheus and Zeus Steal the Show
The stars of the show when it comes to the storyline are the dual narrators Prometheus and Zeus the bickering duet that steals the show even though the situations are quite dire the two of them are always there to lighten the mood and at times the feuding pair of gods are laugh out loud funny. They are like an old couple that has been living together for years that have grown to dislike each other, a bit like Bert and Ernie with sarcasm. The story itself gives us a likable hero who starts as a reluctant protagonist with no formal battle training but has the determination to face and overcome all the obstacles that are placed in his path, this makes him quite likable, and you are invested in his adventures.

Immortals Fenyx Rising is Hours of Fun
Immortals Fenyx Rising is unlike all the recent realistic, serious games that Ubisoft has put out and boy does it work, The story is clever and witty, the environments are packed full of items, places of interest, and an abundant amount of beasts to battle, so it never gets boring. Good graphics bring the world to life and the soundtrack is memorable. Overall, Immortals Fenyx Rising is hours of fun, but the gameplay never fails to test your skill and leaves you with a sense of achievement when you finally complete it.