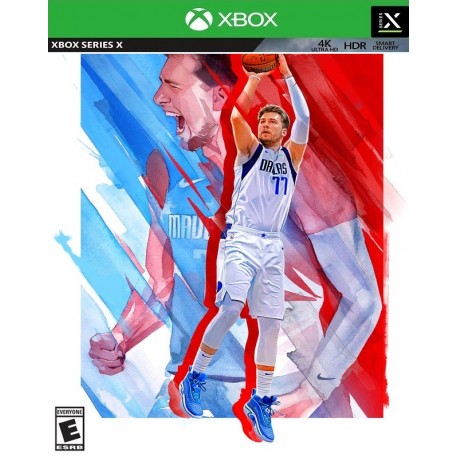 Step Up Your Game
New tactical offence meets an overhauled defence for a more competitive and immersive NBA 2K22. Add skill-based dribbling, shooting, dunking, and alley-oops to your bag of moves and counter them with ferocious blocks and contests on the other end of the court.

Your Journey, Your City
MyCAREER and in an all-new City become one in a groundbreaking 2K22 experience. Embark on your personal journey to the pros. A sprawling MyCAREER life, all within the City. Forge your own path in college, the NBA G League, or even by jumping straight into the NBA. Be a pro off the court by growing your personal brand in the music industry, fashion world, and more. And of course, ball out against the best and fiercest MyPLAYERs in the most vibrant and competitive basketball community in the world.

Your Dream Team
Collect, craft and hoop in the ultimate NBA fantasy competition. NBA 2K22 MyTEAM. Build your dream lineup of NBA stars and legends from any era, and explore game-changing evolutions to the MyTEAM experience, each addition introduced over multiple seasons.

New Season, New Discoveries
A new day dawns with the arrival of NBA 2K22 Season 5. Power within. Gain inspiration from Kevin Durant, Rui Hachimura and future superstar Paolo Banchero. Can you feel it?

More Natural and Realistic Equilibrium
NBA 2K22 is a big advancement and a massive step forward for the 2K franchise, and the fortunate people who are playing the game on the Next-Gen Xbox Series X|S. One of the main highlights of this edition of the game is the new bias to the gameplay that even the most stubborn of veterans will have to admit that these changes bring a more natural and realistic equilibrium to the game. The biggest shift is from attack to defence, shooting has become much harder to pull off and the defence is better organized as the AI learns from your style of play as you advance through the game. As a result of this, your own level of skill also advances as you play and this makes you a better player, but for the more timid players out there is still so much to do and skills to learn offline to stand you in good stead when you are ready to compete against online opponents.

Lay Down Some Tracks
By far the star of the show is the MyCAREER Mode, with a not so subtle nod to the GTA franchise, City is a wonderfully grand sandbox packed full of things to do, it is spread out over quite a distance, so thankfully you get a skateboard to transport you around but personally, I prefer the bike that you can get later on as it makes traversing the City a lot easier. Also, as a more mature gamer, you can imagine my surprise when my superstar baller was parading up and down a fashion show catwalk modelling a stylish jacket, before accompanying a young talented rapper to the music studio to lay down some tracks, all the time checking my social media to see how popular I am. Even I found myself getting right into it and enjoying the limelight and revelling in my fame. As far as SIM, sports game mixes go, City is a unique experience.

Revamped and Redesigned Gameplay
In summing up, NBA 2K22 is brought to life by some of the very best high calibre HD and high resolution 4K graphics. It has an excellent soundtrack performed by some of the most talented up-and-coming independent artists that EA Sports have given the opportunity to them to promote their music, which should be commended. Revamped and redesigned gameplay with a refreshing change of emphasis unlike any seen before in the 2K franchise. An intuitive and ever learning AI that adapts to your style of play and is always challenging, and a bucket full of exciting extras that will give you hours and hours of fun gameplay. Death taxes and EA Sports have another hit with the 2K franchise are 3 of life's certainties.