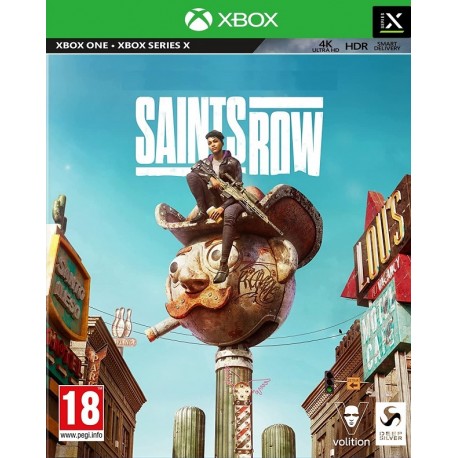 Can you believe that it was a whopping nine years ago that the last offering of Saints Row IV was first released and a whole new generation of gamers and massive system upgrades to the next-gen consoles have taken place since then, Volition and developers Deep Silver thinks that now is the time to reboot the series, and they are probably right? So, what is Saints Row, just another revamp of a popular title with upgraded graphics and visuals? Well, the quick answer to that is a resounding NO! Saints Row is a completely new game with a fresh plot, and all new characters and is set in the wonderful new location of Santa Also a vibrant city that sits in the middle of an arid desert setting. Saints Row is a massive open-world game, much bigger than anything that the franchise has ever produced, it obviously takes full advantage of its elaborate city setting, but also lets you explore and enjoy the rugged, wild desert setting, that encircles the city.

As the Boss of this Collection of Reprobates
For those of you that have not had the pleasure of playing the original games in the series, I can tell you that if you take Grand Theft Auto and add to it bigger and better weapons, a much wider range of vehicles and aircraft, and a huge, impressive amount of gratuitous violence you are quite close, but unlike GTA, Saints Row does not take it's self seriously, in-fact it revels in its silly and sometimes absurd missions, corny jokes and over the top barbarity which makes it the most fun you can get from a third-person shooter video game. It is your mission to take control of Saint Ileso's underworld, along with your gang which consists of your expert getaway driver, Neenah, she has a history with one of the gangs that you will come up against, Los Panteros, she was raised by her father after her mother died, he was a mechanic by trade which gave her a life-long love of cars and their workings. The brains behind your criminal enterprise are Eli, the numbers man, he is smarter than your average hoodlum, his Nigerian parents emigrated to the Midwest of the States, where he grew up and used his intellect and smarts to climb up the ranks. Finally, there is Kevin, He knows everything and everyone, using his connections to get the gang anything that they could need. As the boss of this collection of reprobates, it is up to you to use your various skills to take control of the city, block by block.

Will Give You Hours of Enjoyment
Saints Row takes the bones of the original games and uses the DNA to create a whole new animal, funny, zany, and sometimes silly in its plot and missions, this ultra-violent masterpiece has everything that you need to blast, shoot and bash your way to becoming the king of the city. There are tons of epic missions and side businesses that will give you hours of enjoyment.