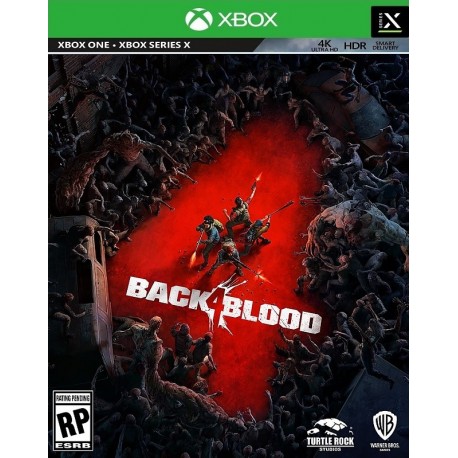 Back From the clever people that brought you the Left 4 Dead franchise Warner Bros Interactive, comes the new exciting cooperative first-person shooter called Back 4 Blood. The game puts you at the centre of a war against creatures called the Ridden, they were once human, but after they were infected by a terrible parasite that turned them into horrifying monsters that seem hell-bent on consuming what is left of our civilization. With the extinction of the human race at risk, it is the responsibility of you and your friends to confront the hordes of enemy creatures, exterminate the Ridden and save the world.

A Dangerous and Dynamic World
There is a Cooperative Campaign in Back 4 Blood, where you get to fight your way through a dangerous and dynamic world in a 4 player squad story, in which you must join forces if you are going to have any chance of survival, as the level of difficulty ever increases in the extremely challenging missions. You can play with up to 3 of your mates online, or go it alone and lead your squad as they go into battle. You can pick from any of the 8 fully customizable Cleaners, which are survivors that are immune to the parasite, and you can arm them with a wide variety of deadly weapons and important items. Likewise, you will have to use strategy to combat an ever evolving enemy that is set on your complete destruction.

Much More Demanding
Why not play either with or against your friends in the Back 4 Blood Multiplayer PVP mode? You can switch between playing as a Cleaner or as the horrendous Ridden, both sides have their own special skills, abilities and weapons for you to utilize. The brand new Rogue-Lite Card System creates differing experiences every single time, You will be in control as you design custom-builds and create fights that are much more demanding. The Game Director is continually countering the actions of the players, adding difficulty and diversity to the gameplay, making the legions of Ridden tougher to beat. The mutant bosses are up to an incredible 20 feet tall.

Packs a Mighty Punch
If you think that the Ridden just staggered along in a zombie fashion, you are sadly mistaken, it was never going to be that easy with Back 4 Blood. With a vast array of the special infected, who are persistent and determined, There are acid vomiting infected that will explode on impact or Bruiser, a 9ft tall monster that packs a mighty punch with his huge powerful muscular arm. You will need great teamwork to take them out. That is why Back 4 Blood is best played with friends, the multiplayer experience is fantastic fun. You can crank up the fantastic licensed music in the bar as a distraction to evacuate some trapped survivors and enjoy some classic sounds as you work together to achieve success.

Fight for Your Lives
Back 4 Blood is every bit as enjoyable as the Turtle Rock Studios classic Left 4 Dead, it has a great ever adapting storyline, the graphics are quite stunning if a little gory, a licensed music soundtrack that will have you rocking along to some great tunes and an impressive multiplayer mode that pits the wits of you and your 3 friends as you fight for your lives against a multitude of formidable tenacious monsters that will take teamwork to defeat. Only you can rescue the survivors and save the world!