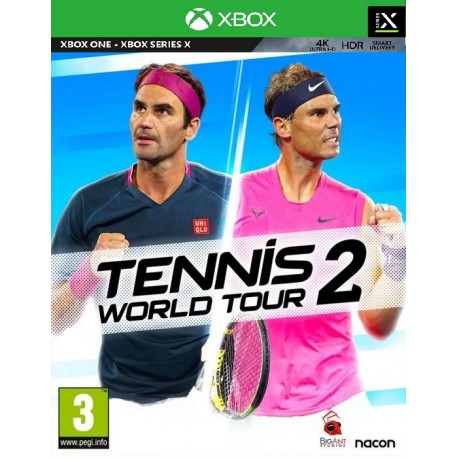 Either create your very own character or play as one of the world's greatest players as you try to dominate the official world rankings, the game is faster-paced, with more detailed animations and so much more realism, experience what are the real sensations of professional tennis when you play in singles or doubles games against the AI or challenge your friends for a game locally or online.

Win One of the Coveted Grand Slams
For those of you that like to just jump right into a game, then the Exhibition will take you instantly into a local singles or doubles match involving up to three other people. Play as any of the leading professionals in the game, choose between any of the 48 players that are available including greats like Andy Murray, Rafa Nadal, Maria Sharapova, or the Tennis legend that is Rodger Federer. If this is your first time playing a tennis game then not to worry, you can practice and perfect your groundstrokes and volleys at the Tennis School, learn to control a cross-court forehand or down the line backhand, and sharpen your skills in the training area before you go up against the very best. For those of you that are looking for a more complete experience, then the immersive Career Mode is perfect for you. Create and design your unique character who with your assistance and guidance can make his way through low-ranking tournaments, all the way to winning one of the coveted Grand Slams. Choose between a variety of competitions, exhibition games lead to tournaments that like in real life have an increased fee to play in the competition and with that enhanced winnings reward you for your success. Winning gives your reputation a boost and enables you to sign up with a new manager, who in turn enhances your XP or your strength with a passive bonus. Choose your battles carefully as the fatigue meter is there to make sure that you give your player a rest every now and again as when the meter starts to fill it will have a negative impact on your character.

Timing is Absolutely Crucial
There are two main shot types to master are Precision and Power, if your player is in the right place the racket swing will then be automatic, for a strong precision shot you then have to just tap the button as the ball approaches you or for a devastating volley keep the button held down then release it just at the right moment, it might seem quite simple, but it is much tougher than it looks, timing is absolutely crucial because after maneuvering your opponent continuously from side to side trying to force them into an error it can be all undone by one mistimed shot. The enhanced graphics and smooth gameplay bring the fantastic world-renowned stadia to life, and you really feel like you have earned your place amongst the Tennis elite.