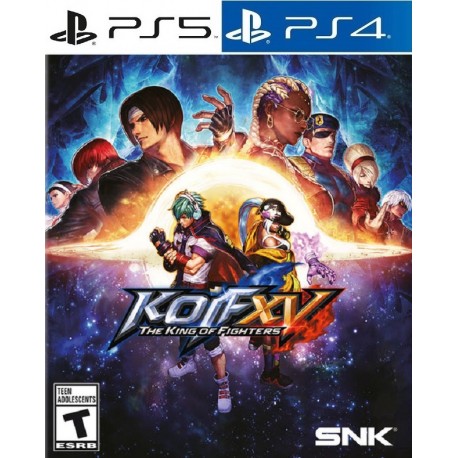 Since its debut in 1994, The KOF fighting games series has been exciting the world with its fascinating characters and unrivaled gameplay system, it has been six years have passed since the has title in the game series, now KOF XV has surpassed all of its previous conceptions in terms of graphics systems and online enjoyment.

A total of 39 characters to play!
Popular classic characters, revived characters, new characters, and much, much more! The most epic battle in KOF history is about to begin!

The climax of the series, combat style!
Using the traditional 3v3 team battle from the series also introduces a new system. Enjoy an unprecedented sensation of speed and freshness!

Easy and versatile online.
The game's rollback net code has been adapted to reduce lag on online games. There are also a variety of options in battle that let you decide how you want to play.

KOF is full of extra content to enjoy.
Including a gallery of videos and voice recordings, a new DJ station with over 300 popular songs from the KOF series, and more.
The story is really fascinating, as are the graphics which are bright, glossy and look fantastic on the PS4 or PS5, the character sprites are large, striking, and have an excellent design, the character movement has been captured exactly, with bone-crunching attacks from a normal blow so when you start with the combinations and the special moves, the on-screen effects go crazy, the incredible attacks will make you wince as they land on their intended target. The audio content is superb for The King of Fighters XV as well, with exceptional voice acting with grimace inspiring, jarring impacts graphically portrayed by the exceptional actors.

Not only looks great but sounds great as well
The King of Fighters XV not only looks great but sounds great as well and has an intriguing, engrossing storyline, but how is the gameplay? As a traditional 2D beat-em-up it has the unique feature of team three on three battles, you take on other trios as you progress through the game, you can either use one of the fourteen teams that are suggested for you like “Team Hero or Team Rivals” if you can't find a team that has the right blend of fighters that you require then you can construct your own team with all your favorite characters.

Shatter Strike
The new addition to the power combos is the Shatter Strike, which trades meter for a single destructive blow, leaving your opponent in a defenseless crumpled state. Blow Back can still be activated from the block, it is still a very useful combo breaker as it drives your opponent back a long way. EX moves, Supers, MAX Supers, and of course, the extremely dramatic Climax Supers has KOF XV full of meter maxing mechanics, mix with that Cancels, Super cancels and Climax Cancels, you have a complex, responsive battle system requiring some of the most complicated and clever meter management anywhere in the modern fighting game genre.

KOF XV is an intense, enjoyable, and exciting fighting game, with an unmatched variety of playable characters, a plethora of attack and defense combinations, it has a fantastic complex storyline, and its characters although retaining their original style the character models are sharper and better textured giving it a more polished look. There are some new characters such as Dolores and Elizabeth Blanchtorche that are absolutely brilliant, and the new boss characters are surely the best that the series has ever created, but best of all is the lush visual effects and radiant visuals that accompany specials and supers.