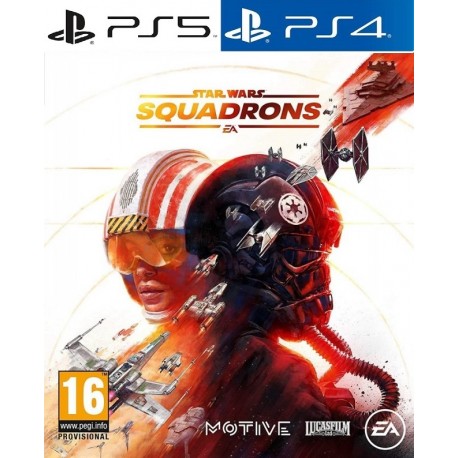 Master the art of starfighter combat in this realistic piloting experience, STAR WARS™ Squadrons buckle up and feel the adrenaline rush of multiplayer dog fights in space alongside your squadron. Take control of starfighters from both sides of the conflict, New Republic X-wings, and The Imperial fleet's TIE fighters, customize load-outs and designs, and distribute your ship's power between the weapons, shields, and engines, while you immerse yourself in your starfighters cockpit and as a bonus you get the option to play the entire game in virtual reality on PlayStation®VR. Discover what it really means to be an ace pilot in the thrilling STAR WARS™ Squadron's exciting solo-player story, that takes place just after the events of Return of the Jedi, in a twist you can see both sides of the conflict as the plot alternates its perspective from one faction's side to the other. The New Republic fights for freedom and justice, and the empire aims to create order. We need you to join the galaxy's finest.

I Live My Childhood Ambition of Flying an X-Wing
Firstly, I have to admit that I am a lover of anything STAR WARS™, so I go into this game ready to live my childhood ambition of flying an X-Wing in a massive battle and using the force to take out my enemies as I maneuver my starfighter in behind a TIE Fighter that is bearing down on a member of my squadron, “Thanks Red Leader”, but can STAR WARS™ Squadrons make my dream come true? Well I am pleased to say that I got double the enjoyment as I got to experience the sensation of flying both Iconic types of craft, in Squadrons you get to be part of both sides of the intergalactic conflict Vanguard Squadron is the New Republic and Titan Squadron represents the Imperial forces, over 14 missions you will alternately play a character from each side of the war, the missions all offer some intense dogfighting and also another target as well, maybe taking out a bigger enemy ship or protecting one of your own, sometimes you will be required to destroy targets like shield generators or reactor cores, and as you progress the later missions the option to change your ship or alter your loadouts, which then helps you understand the mechanics of combat and how best to use the loadout options.

My Ambition to be an Elite pilot and turns it into a Reality
The best thing about STAR WARS™ Squadrons is not the thrilling missions or the nostalgically perfect designs of the ships but the stunning and amazingly accurate environments that each battle takes place in, whether it is a Star Destroyer graveyard or a colorful nebula with its dramatic lightning storms or, as in one case, the remnants of a partially destroyed moon. With or without the next-gen improvements, the stages allow the player to enjoy both famous locations and gorgeous new ones. You can interact with your squadron to reveal more information about each of your group and their character and assess their abilities to determine how they can fit into your battle plan. I love STAR WARS™ and after years of coming close, I finally have found a game that makes my ambitions to be an elite pilot and turns them into a reality.