> The Quarry Xbox One
Reduced price! 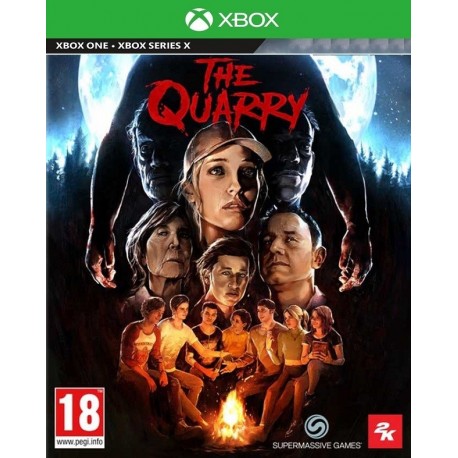 The Quarry Xbox One

This is the XBOX One version which is also playable on the Series X consoles but the  video quality is of the Xbox One.

The Quarry Xbox One

This is the XBOX One version which is also playable on the Series X consoles but the  video quality is of the Xbox One.

Welcome to Hacketts Quarry, a backwater summer camp that is located somewhere in upstate New York, surrounded by woods this idyllic setting has been the successful host to a large group of kids that have spent the summer frolicking in the camp by the lake. But as summer comes to an end only the nine camp councilors remain to finish off their last chores and maybe party a little before returning to their homes and families, sounds familiar? Is meant to, Supermassive Games make no secret of the inspiration behind this teen-horror slasher game, using some of the most notable 80s horror classics to create a masterpiece of cinematic storytelling that follows the template set by the developers with their previous work Until Dawn, part game, part horror film 100% thrilling.

The Teenagers fulfill all the Criteria for a Gore-fest
The Quarry is all about choices, even the smallest decision can have a major impact on which direction the story takes, you will have to be alert to the situation and be quick thinking to get the terrified student councilors that are the protagonists of our story through the night and be alive for the dawn, 9 characters remain at the summer camp after everyone else has departed, and you will get a chance to play as each of them during the game, the teenagers fill all the criteria for a gore-fest, the confident sporty jock, the broody introvert, the nervy one and the sensible one all ticked of the list of teen-horror fodder but as the plot progresses the characters grow becoming more rounded and likable making you want to invest in their story and the predicament that they find themselves in. To do this the characters must be realistic and Supermassive has invested a lot of their budget to get some major voice acting talent, they have brought in some well-established stars to bolster the hot major teen actors who play the camp councilors, Lin Shaye, Lance Henriksen, and Ted Raimi all play wonderfully weird and spooky characters that will keep you wondering right to the end.

It is a Dramatic Horror Story Come to Life
As well as keeping everyone alive you will also enjoy exploring and retrieving 22 tarot cards to amass that have been hidden all around Hacketts Quarry, at the end of each chapter you will go to see the clairvoyant Eliza, played by the wonderful Grace Zabriskie who will let you select one of the cards to give you an insight into what happens in the next chapter, although brief the portents can be extremely useful and help you when it comes to making the right decision when the time comes. There are more items to discover than just tarot cards, so be on the lookout as these items are not always obvious. Most of the action sequences take place through quick-time events where you will have to press the allotted button in the allotted time not to worry these sections are not too difficult, but they do add to the ominous sensation and add a little panic to your play. The Quarry will sweep you along, adding twists and turns just when you think you know what is going on, Supermassive has once again made more than a game, It is a dramatic horror story come to life.