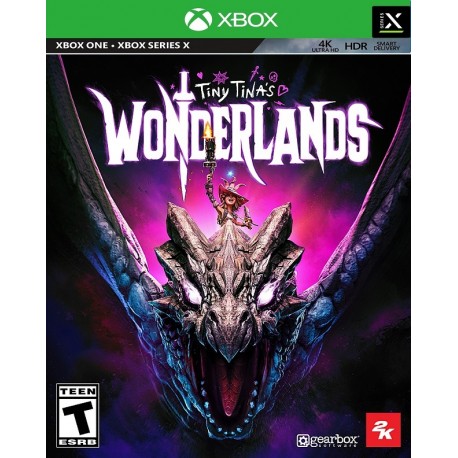 This is the Xbox One version of the game, but it runs on Xbox Series X|S due to backward compatibility.

Prepare yourself for an epic quest, full of adventure, humor, awe, oh, and some impressive hardware and weaponry. Bullets, battleaxes, and magic spells all collide in this fabulous chaotic mixed-up world, that is brought to life by the unpredictable Tiny Tina, your enigmatic guide through this amazing table-top kingdom where the normal rules of engagement just don't apply. You can cross the vast realms of impressive gleaming spired cities, dark dank mushroom forests a foreboding fortress, and many more wonderful scenarios. Use your overpowered weapons and cast potent magic spells in this First-Person Shooter, it will take all the firepower you can muster to dispose of the vast hordes of enemies that include skeletons that give you attitude, sharks that hunt their prey on land, and impressive testing bosses, get down into dangerous dungeons that a chocker block of huge loads of lovely loot.

Create the Perfect Warrior
Accompanying you on your mission to defeat the evil Dragon Lord are a group of humorous characters like the stubborn Captain Valentine and a rule obsessed robot called Frette plus some pretty incredible other characters that you meet along the way, such as the lute-playing Bardbarian and the enigmatic Fairy Punchfather, The detailed level of customization permits you to create the perfect warrior, using the six skill trees in the multi-class system to combine the different abilities, level up, expand your impressive arsenal and become the ultimate hero. In the Multiplayer Mode, you can team up with 3 of your friends seamlessly online or in a local split-screen game where you can either share your bounty or compete to see who can possess the most goodies.

Bunkers and Badasses
Tiny Tina's Wonderlands is a direct follow-up to Borderlands 2 Tiny Tina's Assault on Dragon Keep, Wonderlands is a simulated role-playing table-top campaign that goes by the name Bunkers and Badasses, it is a bit like an absurd parody version of every Dungeons and Dragons inspired game, full of outrageous violence, loads of destructive weapons, and some hilarious comedic unforgettable moments. With a very impressive star-studded voice talent, Ashley Burch once again plays the objectionable Tina, the incredibly talented Will Arnett joins the cast as our resident evil bad guy the Dragon Lord, Wanda Sykes plays Frette and Andy Samberg is Captain Valentine the over-eager, thick member of our ridiculous group and once again Chris Rager is Mister Torgue the Bardbarian. There are some seriously famous actors showing off their huge talents in this game, plus the writing is so clever, brilliant, and genuinely laugh-out-loud funny almost all the time.

A Seriously Great Game
Just when you think that you have completed the game, which will take you about 25 hours, you then find out that there is an endgame activity entitled The Chaos Chamber to find to conquer, I warn you now that it has a high level of difficulty and some dastardly mechanics to keep you interested so get your enchanted fry pan ready to slap a few baddies across the head. Tiny Tina's Wonderlands is a seriously great game, with engrossing gameplay, really likable characters, and tons of endearing silly fun all in one great package, whether you play it on the Xbox One or the Xbox Series X|S you will not be disappointed and if you are a fan of the Borderlands franchise you should already know what they are capable of, and they have not let you down.