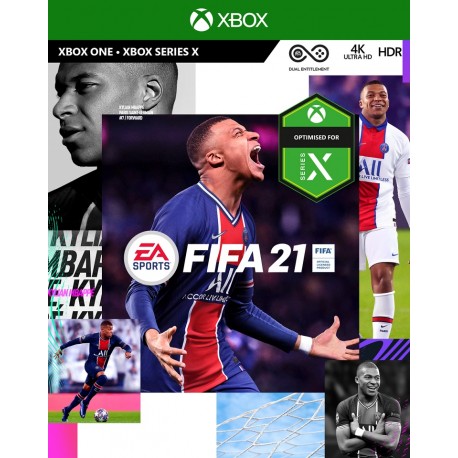 You will win as one with the all-new EA SPORTS™ FIFA 21 with original ways to team up and express yourself from the street to the stadium. Powered by Frostbite™, FIFA 21 raises the level of the game with completely fresh features.

Follow the Progress of Your Managerial Career
Firstly, I feel the need to point out that the brilliant redesigned gameplay mechanics are going in the right direction and gives the player superior control over the events that happen on the pitch. After being left out to sit on the substitutes bench for the last few seasons, Career Mode makes the first team starting line-up with FIFA 21. The immersive offline game mode has been updated with various fun new features that change the way you build your team and follow the progress of your managerial career. In earlier editions of the iconic series you were only given the choice of actually playing the entire game or letting the AI simulate the game from start to finish, well with FIFA 21, the match simulations are now interactive, allowing you to manage many of the different aspects of the game as the simulation plays out in real-time. While the game is in progress you are supplied with match facts covering possession, shots, and player ratings that are constantly updated. Letting you make key choices, like which sub to make or who you will select to take that crucial penalty. The best part is that if you are down by a goal or two, you can quickly jump in and apply your superior skills to make it a dramatic comeback and collect all three points.

An Exciting New Gameplay Feature Called Creative runs
FIFA 21 has made some good improvements to the gameplay, but these seem more subtle than you might have expected, given the chance, after you have played the game a few times you will start to notice those differences, compared to FIFA 20. EA has set up an exciting new gameplay feature that they call Creative runs, this new feature is something that veteran players have asked for years, and it seems that they have heard you, So when the player that you are controlling lays off the ball to his teammate, you can get him to continue his run and receive the ball further up the pitch, essentially playing a one-two, you choose which direction he will run by tapping the right trigger directly after the incisive pass is made. You can now cut through the opposition's defensive with just one rightly timed pass. The response of your more skillful players has also been enhanced so that they do not have the turning circle of the average double-decker bus, and instead, they can now turn on a sixpence, plus the remodeled dribbling system allows your star players like De Bruyne to just skip away from a challenge. FIFA 21 does not rip up the blueprint but instead makes great improvements to the aspects that fans of the game were saying needed, the new SIM interactive options, and youth development.