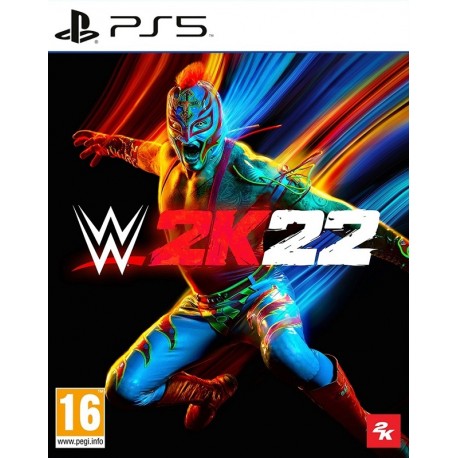 The much-loved WWE 2K22 has finally arrived, and it is packed full of all the great features that you can handle! You will be dragged from the stands to the very top of the WWE Universe. Throwdown with the latest and greatest with the most life-like representations of all the latest WWE Superstars and Iconic Legends. Relive the most important moments in the illustrious career of Rey Mysterio, all in a stunning 2K Showcase. Hitting that hard has never been so easy. Take control of Raw, SmackDown, NXT, or NXT UK as a General Manager in MyGM, pick your ideal unique roster of WWE fighters, then compete against rival GMs to create the biggest franchise in the WWE universe. Enjoy not one, but two MyRISE original storylines with groundbreaking male and female adventures that allow you to decide your journey unlike ever before, plus with a first for the franchise, an all-new MyFACTION where you can build a faction that can compete with the nWo, there are weekly events and regular updates.

Load Times are Slashed
WWE 2K22 operates at a stunning resolution of 4K and a powerful 60 FPS on the PS5, the main advantage comes with the load times that are slashed on the next-gen PS5 console optimized edition. With near-instant loading times the benefits are clear to see, add to that the much higher quality of lighting, textures, and shadows that are quite noticeable and only available on the PlayStation 5.

A Completely New Feel
After skipping a year with no offering last year WWE 2K22 is finally a great return to form, for once “It hits harder”, is much more than just a cosmetic tagline. The latest edition to the WWE 2K franchise has had a major overhaul from its previous, less popular edition. It has a completely new feel to it, with fresh controls that are now concentrated on combos it has choices of light, heavy and grapple attacks, and thankfully the whole reversal feature has had a complete overhaul, which now makes the competition more flowing and gripping from the first bell to the last. At last, the gameplay seems like fun once more, even the veteran players who will have to come to terms with a new way of playing will be pleased with this better, almost arcade-style after what was considered the slow dawdling simulation style of its predecessor. Make use of the superstar trainer Drew Gulak who is available to help you when the game first starts at the WWE performance center in Florida with a clever tutorial to help to get you up to date with the gameplay fast, no matter if you are a seasoned fighter or a complete novice.

Feel Each and Every Impact
After taking over a year out WWE 2K has returned with a bang, Impressive graphics give you a realistic and stunning experience, the fighters are rendered to perfection as are the crowd, lighting shading, and fine details. Great sound and the feeling of each and every impact using the DualSense controller adds to a unique sensation, unlike anything that you have felt before. WWE 2K22 has been refreshed, redesigned, and reborn, returning it to the number one contender to the gaming crown.