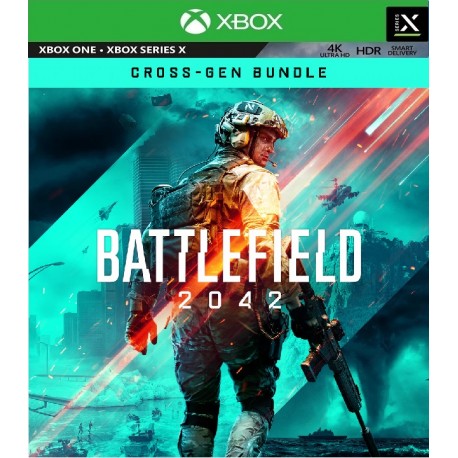 The Iconic all out warfare first-person shooter marks its return, The exciting Battlefield 2042 continues the brilliant franchise in its latest instalment, set in a world sometime in the near future that has become a dystopian and transformed by disorder, you will have to quickly adapt to and overcome dynamic battlegrounds with the help of your specialist squad and vast arsenal of cutting-edge weapons and vehicles. With the support of a massive 128 players on Xbox Series X|S (64 players on Xbox One), Battlefield 2042 brings an unprecedented scale to the vast battlegrounds set all across the globe as you participate in the updated multiplayer experiences such as Conquest and Breakthrough plus the all new Hazard Zone.

The Brink of War
After extreme weather events and resource conflicts have shifted the delicate balance of power around the globe, The United States of America and Russia are standing on the brink of war, while a mix of non-aligned combat veterans form independent groups known as Task Forces. There are 7 huge maps for up to 128 players, from bustling cities in Seoul to the arid Egyptian deserts, every individual map offers a varying and unique experience, each based on their own natural environments. Unleash your combat creativity through the full roster of the latest cutting-edge weapons, jets, vehicles and helicopters and the all new state-of-the-art equipment inspired by the year 2042. So choose your role on the battlefield and form hand-tailored squads through the brand new Specialist system. Based on Battlefield's four Classes, Specialists have one unique Speciality and trait, but the rest of the load-out is fully customizable.

The Most Amazing Graphics
It is really hard to believe that the Battlefield franchise has been going since 2002 making it an incredible 20 years old, The game has advanced so much since the early editions and now works on massive maps and of course uses the latest generation consoles at their full power to produce some of the most amazing graphics of desert cities that are being overwhelmed by climate change or abandon Antarctic drilling bases that really come to life and the sound design is brilliantly handled, the sound of gunfire is realistic, the same for explosions that occur near to you so that you are completely immersed in the hectic battles of each high quality War zone.

Be Victorious in Battle
Battlefield 2042 is a multiplayer only FPS, so you will need to be connected to the internet to play the modes that all involve other players ranging from PvP and PvE which is a bit more welcoming to new converts. The game produces some of the largest open world maps in the FPS game world which can be travelled across either on foot or by using the futuristic transport that Battlefield 2042 has to offer, most of the vehicles can be piloted by one player with the rest of your squad either hitching a lift or manning the impressive weapons available. That makes it a pleasant change from the usual just run and shoot gameplay that is ever present in traditional FPS games. So gather your friends and create the perfect elite squad to take on an overwhelming array of enemies and come out victorious in battle.