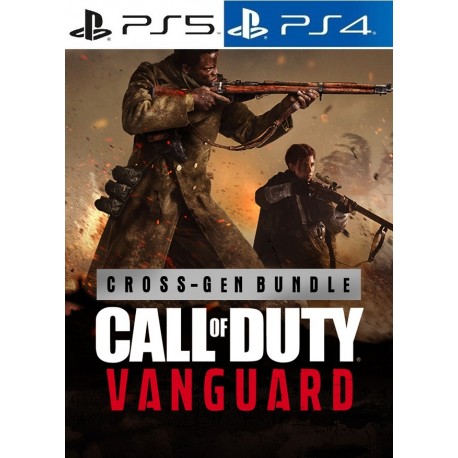 Rise on every front. Dogfight over the Pacific, airdrop over occupied France, defend Stalingrad with a snipers precision or blast your way through the advancing enemy forces in North Africa. The Call of Duty franchise returns with Call of Duty: Vanguard, developed by Sledgehammer Games, where you will be plunged into realistic WWII combat on a never seen before scale.

Call of Duty: Vanguard will also bring in the unprecedented all new Call of Duty: Warzone integration post launch, and feature cross progression and cross generation play, Plus a massive calendar of free post launch content that adds in new multiplayer maps, modes, seasonal events, community celebrations and much more

In Vanguard, we are taken back once again to WWII, but this time the campaign introduces us to a group of individuals who are united to create an elite special unit charged with taking down a nefarious Nazi officer who is overseeing a secret operation named Project Phoenix. Set just as the second world war is coming to its final days. Adolf Hitler has committed suicide in his bunker, and the remnants of the once mighty German army make a fruitless final stand to defend Berlin.
Our diverse group consists of A British commander, an Australian explosives expert and Lady Nightingale who is a Russian sniper whose character is actually based on a real person. When the team get captured by the Nazis they are questioned by an officer (voiced by Dominic Monaghan) they each retell their fascinating stories we relive their experiences.

The Beachheads of Normandy
With each section of the game, we are taken to some of the hottest war zones of WWII. The rubble that was once the dazzling city of Stalingrad now reduced to ruins. The beachheads of Normandy during D-Day and fighting to free the pacific from the Japanese tyranny and each location gives us some new toys to play with, like the destructive flamethrower that you have the pleasure of getting to grips with in the Pacific section. A unique feature of the Stalingrad section is that Lady Nightingale can climb up walls, and the ruined buildings have a series of vents for our femme fatal to make her kill and vanish without a trace. You can even pilot a fighter during a massive air battle and dogfight with the enemy planes.

The Best Ever Edition
The excellent visuals and graphic and 4k Performance as you would expect from the world's favourite game franchise. A solid soundtrack, well produced and composed by Bear McCarthy. Incredible detail and animation of the characters, buildings and even the stunning sunlight horizons., you can only admire the level of realism that they have put into facial expressions. They have utilized some of the most talented acting expertise. Overall the Campaign is addictive, the Multiplayer is brilliant and especially for you Zombie killers they are back with a vengeance.

We wanted Call of Duty Vanguard to be the best ever edition of our favourite game, and I am happy to say that we were not disappointed.