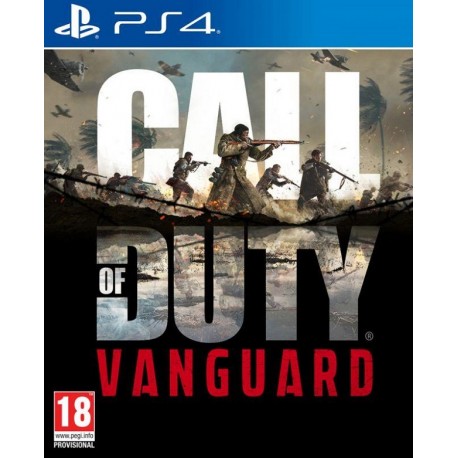 Rise on every front. Dogfight over the Pacific, airdrop over occupied France, defend Stalingrad with a snipers precision or blast your way through the advancing enemy forces in North Africa. The Call of Duty franchise returns with Call of Duty®: Vanguard, developed by Sledgehammer Games, where you will be plunged into realistic WWII combat on a never seen before scale.

Call of Duty®: Vanguard will also bring in the unprecedented all new Call of Duty: Warzone integration post launch, and feature cross progression and cross generation play, Plus a massive calendar of free post launch content that adds in new multiplayer maps, modes, seasonal events, community celebrations and much more

Sledgehammer Games return you to WWII
After their wonderful success developing the previous wartime game, Call of Duty® WWII. Sledgehammer Games once more travel back to WWII, This time the story follows the intrepid adventures of a fictional squad of elite military operators combining to form the Vanguard special unit. Each from a different allied nation, and each the master of a particular skill. Their assignment is to delve into the mystery surrounding the Nazi secret project Phoenix.

Our Intrepid Heroes are Captured
Our new characters, the Commander who leads the group is a British officer named Arthur Kingsley, cocky American pilot Wade Jackson, a demolitions expert from Australia called Lucas Riggs and the sultry and deadly sniper Polina Petrova. (Who is based on a real life character). After the opening mission where our intrepid heroes are captured, the rest of the game then uses their past adventures as a way of thrusting you into some of the most important events of WWII. Key historical events such as the battle of Medway and the D-Day landings are brought to life, and you are filled with the grit and determination of the desperate, exhausted forces defending Stalingrad. Authentic conditions and incredible realism are what makes the Call of Duty franchise so enthralling.

Legendary Russian Sniper
As each section unveils past missions, we get to know some of their backstory of the characters, like Polina Petrova, who became the legendary Russian sniper who was given the nickname Lady Nightingale. Her gameplay sequences are the most exciting of them all, climbing, parkour across the Stalingrad rooftops, stealth sniper missions where she can traverse the various vents to find the optimum firing position and to disappear after the target has been hit. There is even a boss battle at the climax of her story. What really impresses us most about this femme fatal is the wonderful talent of Laura Bailey, who is the voice talent behind the female crack shot.

A Worthy Addition to the Franchise
With a whole new storyline, intriguing new characters and the opportunity to fight in some of WWII's most iconic encounters. Solid and smooth graphics and a terrific soundtrack to the cinematic action, which has been described as one of the highlights of the game as it captures the mood and emotion of each scene, adding to the ominous atmosphere. With some great new features and some old familiar favourites, Call of Duty: Vanguard has all the creativity of it's renowned predecessors and is a worthy addition to the franchise.