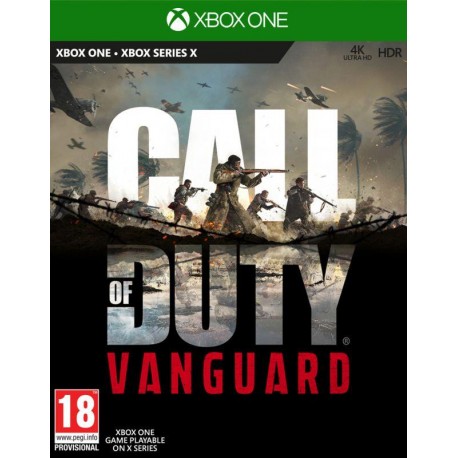 Fight on every front. Dogfight over the Pacific, airdrop over occupied France, defend Stalingrad with a snipers rifle or blast your way through the advancing enemy forces in North Africa. The Call of Duty franchise returns with Call of Duty®: Vanguard, developed by Sledgehammer Games, where you will be plunged into realistic WWII combat on a never seen before scale.

Call of Duty: Vanguard will also bring in the unprecedented all new Call of Duty: Warzone integration post launch, and feature cross progression and cross generation play, Plus a massive calendar of free post launch content that adds in new multiplayer maps, modes, seasonal events, community celebrations and much more.

Roll back the clock with Sledgehammers unique twist on a classic best-selling game. WWII is once again at the centre of an enthralling plot, but this time we are transported to the very end of the war, when the German forces have been routed and the Führer had just taken his own life in his Berlin bunker. After discovering that there is a secret German plot called project Phoenix. A varied group of allied agents are sent to unlock the enigmatic mystery. Whist attempting to discover exactly what the project is, our plucky heroes are captured by the Nazis.
So who are the warriors that make up our band of lethal allied agents? Firstly the cocky and fun-loving American airman Wade Jackson, alongside him is an Australian explosives specialist Lucas Riggs who is only happy when he is blowing things up. Polina Petrova, aka Lady Nightingale (based on an actual person), a top Russian sniper who became known for her many kills as she was not only silent but deadly as well. The rag tag group is led by Arthur Kingsley, a British commander with the skill and courage to lead the squad behind enemy lines.

This leads us nicely into the plot line, which uses flashbacks from our four protagonists to set up the story. It will take you to the battle of Medway, go on a bombing run over a Japanese battleship, and relive the D-Day landings breath in the atmosphere of one of WWII's most significant battles or traverse the ruins of the once great city of Stalingrad, crawl through the rubble as Russia makes every inch of the German advance a painful one. This is where we find the fabled Russian marksman nicknamed Ladynightingale. Voiced by the talented Laura Bailey, Climb buildings and scale walls and discreetly, parkour the city rooftops before using the building vents to get into position to take a clean shot then escape into the night without ever being spotted, like a ghost.
With intriguing new characters a plot line that immerses in some of the most key events of WWII, superb graphics which are smooth and solid make it such a realistic experience for the user. The soundtrack creates the mood perfectly and has been called an outstanding highlight of the game. The Call of Duty team has once again produced a masterpiece in the genre, leading the franchise into a new era. A worthy addition, Call of Duty: Vanguard will be a great complement to your personal collection.