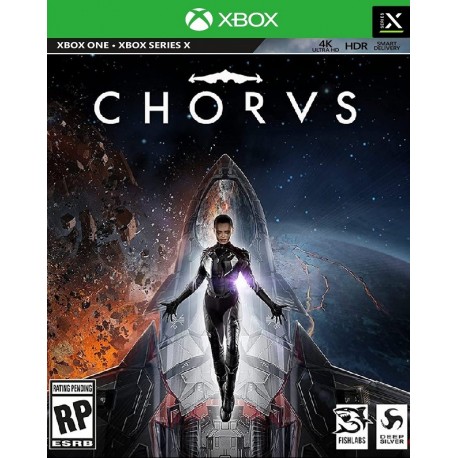 Accompany Nara on her mission and help her destroy the dark sect that created her. She can unlock devastating weapons and her prodigious abilities in a true evolution of classic ship games. Together with forsaken, her sentient star-fighter, you'll get to explore ancient temples, engage in thrilling zero-gravity battles and venture into a place beyond our reality.


A Journey of Redemption
Follow Nara as she confronts her troubled past. Travel the galaxy and cross the borders of reality to unite the forces that are still desperately trying to resist the attacks of the Circle and their leader, the Great Profit.


Adventure Beyond the Void
Enter a dark new universe, full of life and conflict. Explore awe-inspiring locations like a bustling space stations and strange planes of existence. Fight fierce combat in zero gravity, whether in epic cosmic landscapes or narrow glass passages. Chorus offers you the balance between the huge scale and spectacle of space exploration, and the faster paced, more frantic action.


One pilot, One Ship, One Living Weapon
get powerful and varied weapons and combat upgrades. Master your ship's fluid mechanics and Nara's deadly mental abilities, such as, teleportation, and telekinesis, to subdue massive hordes of enemies and take down gigantic battleships. Chain your powers together to create the ultimate living weapon.

Dramatic Atmosphere
Chorus has created for a completely unique gaming experience, it is a traditional Arcade Space Shooter but Fishlabs have also added elements of Sandbox and RPG to the mix, this gives the game that extra relevance and dramatic atmosphere that you cannot get from a classic style shooter. Throughout the game, Chorus has given us a series of demanding missions scattered throughout the galaxy.

An Ominous Sense of Danger
As for the quality of the visuals, when you play the game on Xbox Series X it operates at a solid and exemplary 4K and 60fps and as a shooter game it is a delight and a joy to not only play but also to appreciate the amazing images that Fishlabs have brought to us, in fact by accessing the menu there you will find a Photo Mode to snap and keep your favourite scenarios. The voice acting is convincing and the in game music is great at setting the mood and creates an ominous sense of danger at every turn.

Enforcers for the Circle
In the game you are the character Nara, a skilled pilot and the Chosen One of the great prophet, you are the commander of the elite squad known as the Elders who are the main enforcers for the Circle. You and your fellow pilots possess incredible, earth-shattering special powers that bestow on you remarkable abilities which would usually lay dormant. Harnessing these exceptional talents, you must destroy the Faceless, a rebel group that have gained similar powers and must be eliminated if there is to be finally peace and order in the galaxy.

Wracked with Guilt
The never ending war has dehumanized both you and your squadron to the point where the destruction of an entire world and all of its billions of innocent people becomes a viable option. In the aftermath of your annihilation and wracked with guilt, you flee leaving behind your rank and special powers for a life of anonymity as a scavenger, where they ask no questions and have no knowledge of your dark past. When your past comes back to haunt you, you are left with no other option but to fight, to take your revenge on the circle, the Great prophet and all who stand in your way.

Exhilarating and Thrilling Dogfights
Chorus is one of the most addictive space combat games ever made, with exhilarating and thrilling dogfights, an open world with testing missions and loads of new abilities and upgrades for you to earn as you retake control of the cosmos. Join Nara and Forsa her belligerent AI, in their search of retribution, revenge and absolution.