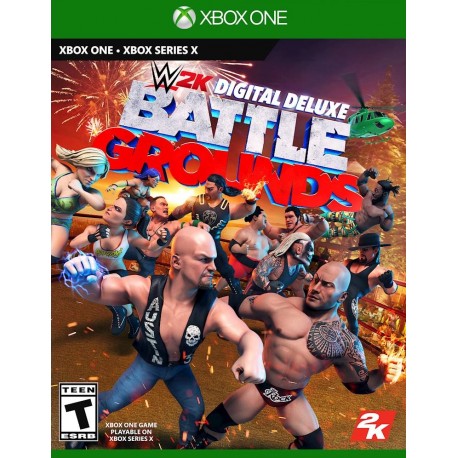 The amazing world of WWE will now become your Battleground with all new full-on, over-the-top arcade-style action. Enjoy it as your favorite WWE legends and Icons confront one other in the most incredible and zany interactive scenarios in the world, select your very favorite style of battles using your armory of exaggerated maneuvers, special abilities, and some devastating power-ups Match types include Royal Rumble, the Steel Cage, and the Fatal four Way plus loads more, while all the time Jerry “The King” Lawler and Mauro Ranallo call the shots on the chaotic contests, Ask yourself, are you ready to enter the Battleground! Current WWE giants and some legendary warriors fight it out that cause complete pandemonium in these crazy in-your-face contests. Destroy your opponent with one of your extravagant signatures moves as you enjoy the immersion of the fully interactive environments

The Greats of Professional Wrestling
Traverse the all-new immersive and enjoyable Story Mode that uses highly innovative original comic strips to illustrate your individual tale with the help of the greats of professional wrestling that are Stone Cold Steve Austin and Paul Heyman, as you head the search for the next WWE Superstars. You will compete as a colorful and flamboyant novice character as you face some of the more established big names of the WWE. You can test yourself and show the world your newly found skills that will then unlock brand-new characters and Battlegrounds. Compete in online competitions to make your claim to being the King of the Battlegrounds or attempt to survive the online melee competitions against players from all over the world, or just play against your family or friends with the fantastic local multiplayer mode.

I Could also Pummel my Opponent with a Guitar
WWE 2K Battlegrounds unlike all of its predecessors has taken all the focus away from trying to give you a life-like wrestling simulation and has instead gone for a more enjoyable arcade-type game. The massive roster of WWE stars is now happily portrayed by a more caricature style animated image, which totally distinguishes it from the other major titles in the series, there is a certain likeability in these newly stylized characters as they perform blows, key throws, and their special moves in such an entertainingly, exaggerated manner that it takes the whole experience into an amazing cartoon world. I could not resist having a wry smile when I first found out that I was able to bring and freely utilize objects like the mandatory folding chair into the ring, but imagine my surprise when I found out that I could also pummel my opponent with a guitar or even a hammer without fear of being disqualified. They have also added one or two little twists like you cannot win your steel cage match until you have collected enough of the money that appears in the ring as you battle your enemy, this adds a new layer of difficulty to the quite simple gameplay.

Scotland Arena uses Bagpipes, Which is Scary
The environments are cleverly animated and are not only wonderfully stylized, but they each also have an interactive element that accompanies it, The New York Pit has Lava, The Everglades has an Alligator, The Scotland Arena uses Bagpipes which is scary, while the Mexico Arena has an interactive Goat would you believe? There is a Helicopter at the Boot Camp and finally, Detroit is set in an Auto Shop, so give you plenty of Oil Barrels and a Car Lift to battle with. Plus, there are already new free DLCs on their way, with masses more characters and locations for you to enjoy. WWE 2K Battlegrounds is a refreshing look at the series with new faster gameplay and some wonderful stunning settings, easy-to-master controls, and some creative options which let you build and design your arenas as well. It is a Great experience, Great Game, has Great Characters, Great to Play.