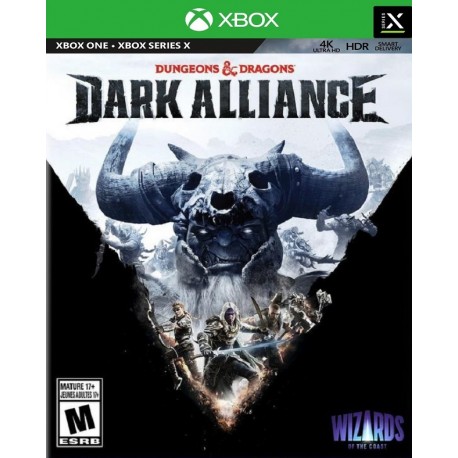 The Dungeons and Dragons game Dark Alliance has beautifully brought to life the Wizards of the West Coast, who have created an amazing fantasy world of Icewind Dale. In The follow-up game to Baldur's Gate, this RPG is packed full of real time combat against Grey dwarves and destructive and Trolls. The tales commence with Icewind Dale being terrorized by towering Frost Giants and unrelenting Dragons, who roam unchallenged, all the time the legions of evil lie in wait getting stronger as they prepare to invade the Ten Towns. In a time of heroes, four mighty warriors reunite to vanquish the swarms of evil doers threatening to overrun the Dale. Discover the frigid world of Icewind, complete challenges, earn some useful gear, unlock some incredible new skills before challenging the unbeatable bosses that end each section.

Endless Army of Unstoppable Enemies
Dungeons and Dragons is a world populated by some of the most iconic beasts to ever inhabit a fantasy novel and Dark alliance is no exception you will have to go up against White Dragons, Frost Giants and Beholders, gather your Companions and pluck up your courage as you will need it to face the endless army of unstoppable enemies. Playing the multiplayer Co-op with up to three friends, you will need to work together as one brutal monster killing machine. United, you have the ability to take down even the most unbeatable boss or huge hordes of smelly goblins. In the main solo to game you can select any of the four heroes each with their own individual fighting styles to control with the aim of finishing the chapter, beating the boss, and you will be rewarded for your achievements with goodies and enhance your abilities.

Take a Massive Amount of Punishment
Tuque Games have cleverly made each one of the four main characters have combat styles unique to them. Drizzt is a fast moving hero who rushes in and deals as much devastating damage as possible, then is out of there. Bruenor is a bulldozer of a man who can take a massive amount of punishment without flinching, Wulfgar is the big hitter who can wield even the mightiest two-handed weapons that can deal out some crushing blows, and Catti-brie, who has the most fascinating gameplay of them all, She has long ranged attacks as her ability and can give support to the other three, killing enemies before they can get anywhere near her. The real beauty is that all four heroes are so enthralling that you will want to play the solo game with each one of them.

Tuque Games have genuinely made each one of the four characters fighting styles individual. Drizzt is a rapid moving character who rushes in and deals as much damage as possible, then is gone. Bruenor is a heavyweight who can take a massive amount of punishment, Wulfgar is a big hitter that can wield the mighty duel handed weapons that deal out some shattering blows, and Catti-brie, she has the most interesting gameplay of the four, she takes care of all the ranged attacks on behalf of the group. The beauty is that all four are so engrossing that you will want to play the solo game with each one of them.

Battle Together as One
Dark Alliance is probably best played in the multiplayer Co-op Mode, the fighting abilities of our four heroes work best when combined, you can activate team attacks where the Companions of the Hall simultaneously launch into battle against a single stubborn enemy, also you can be healed by one of the Companions if your life force is running low. It also loads of fun to play the game solo yet in truth it is much better with three friends, there are even fantastic thirty to sixty minute games for those mates that haven't got the whole night to commit. For fans of Dungeons and Dragons, this game encapsulates everything good about the fantasy realm of Icewind Dale, for the newbie it is a wonderful introduction to this iconic genre.