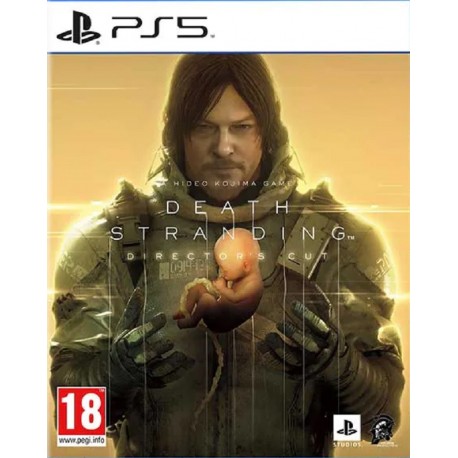 Remastered especially for the PlayStation 5, State-of-the-art combat and an all new competitive ranking system. With wonderful expanded content and containing a fresh armoury of weapons and extra vehicles, there are new enemies to engage, and new environments to discover, plus bonus missions and fun mini-games. With an expanded storyline experience for you to enjoy in extended locations. Death Stranding Directors Cut has a Social Strand System that allows you to connect with other players from all around the world.

Unique Features For PS5
Feel the spectacular haptic feedback courtesy of the game enhancing DualSense wireless controller, you get to feel all the authentic environment effects come to life. A specially designed trigger with adaptive resistance. Use stereo headphones to make the realistic SFX jump to life in 3D Audio. The loads times are incredible, so you can jump straight in thanks to the PS5's ultra-fast SSD. You can pick between Fidelity Mode in native 4K or Performance Mode, with scaled 4K and an impressive 60FPS and both come with HDR support, so sit back relax and take in the amazingly clear graphics and the advanced texture streaming.

After the Death Stranding, Everything Has Changed
We join the game as with the original controlling the main character Sam Porter Bridges, as he continues his journey, traversing North America from the east coast across the country to the west. His mission is to bring the now isolated communities into the Chiral Network to create some form of society in the world. After the Death Stranding, everything has changed, including the arrival of the eerie, spectral BTs to the world. Sam has to deliver cargo from one place to another whist keeping the goods safe and in a pristine condition, all the while avoiding as much conflict as is possible.

Interesting New Weapons and Equipment Additions
Exclusive to the Director's Cut, are some very interesting new additions to the equipment roster, the huge Cargo Catapult which is such a clever idea, instead of trying to get your delivery through dangerous areas that you know will be over run by the enemy load it onto the catapult and blast it across the sky and slowing the descent as it comes back to the ground. It is very useful at times and great fun to use. Or you could use the Maser Gun, another new addition that is a very helpful when you need to bring down MULES without fatalities, sometimes. Early in the game you will be introduced to the Firing Range another new location where you can freely check out all the weapons that are available to Sam, you can blast away at the targets till your heart is content, great practice for the beginner.

Loads of New Features
Death Stranding Directors Cut is a wonderful adaptation of an enthralling game that brings with it loads of new features that improve the original version, like a Racetrack, which you construct yourself before taking to take a series of competitive time trials around the Fragile Circuit with old and new vehicles for your driving pleasure that are sheer enjoyment. High Resolution and High Definition are available for the very first time they vastly improve the graphics, plus great sound. There is no downside to the Directors Cut.