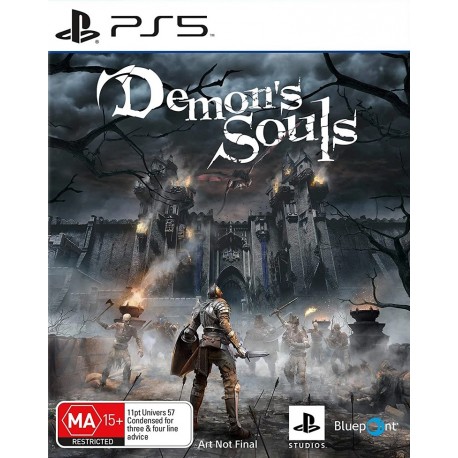 Out now from PlayStation Studios and Bluepoint Games is a remake of the classic, Demon's Souls. The game has been completely rebuilt from top to bottom and creatively enhanced, this remake introduces the horrors of fog-bound, obscure fantasy land to a completely new generation of gamers. Those of you that have experienced its difficult and intriguing gameplay playing the original can again face the darkness in now improved stunning visual quality with fantastic powerful performance. In his search for power, King Allant who was the 12th King of Boletaria used the ancient Soul Arts, awakening a deadly demon who comes from the beginning of time called the Old One, after the Old One was summoned from his slumber a thick fog settled across the land, bringing with it a horde of nightmarish monsters that fed on the souls of humans, when stripped of their souls, people lost their humanity and hunted the souls of those that remained. Now Boletaria was isolated from the outside world, any knight that dared to enter the dense fog to try and free the land of its curse unfortunately never returned. So now you assume the role of the Slayer of Demons to face the nightmares and send the Old One back to where he came from.

Interact with the Crazed and Twisted Characters
Venture to the northern kingdom of Boletaria a once rich, lush, and prosperous land of brave, honorable knights that is now overrun by demonic creatures that hunger for the souls of their victims. Interact with the crazed and twisted characters that have been affected by the demented world that surrounds them, and unravel the mysterious and intriguing story of Demon's Souls. Learn and improve your skills in combat, you will need to know when to push on and when to hold back because every missed blow or sloppy mistake will put at risk all those essential souls that you have strived so hard to collect. The rewards that you receive for beating the most powerful enemies are immense, and here death is only another state of being and not the end of the story. Online, you can compete against the world's greatest warriors in formidable Player Versus Player action, with incredible online invasions adding to the danger of your mission. You can play co-op by calling allies to aid you in your fight against terrifying demons.

The Game Now Realizes its Full Potential
What makes Demon's Souls so good is how Bluepoint has taken their creativity and overlaid it on From Software's original game but not just remaking it but making it as it should have been so that the game now realizes its full potential so even though the game pays respect to From Software's hard work, but that doesn't stop them from making it great in its own right. Now every aspect of the stunning environment has immense detail, the statues, stonework even the characters that inhabit the kingdom are brilliantly brought to life, for the first time you can see expressions on the character's faces. Each of the five arch stone takes you to a different area that is each diverse visually and have a distinct atmosphere the next-gen console's power not only gives you some of the best graphics but by using a good pair of 3D headphones you can locate your enemy way before you see them and the precise nature of the sound mechanics does bring an intense realism unseen in any game before. Newbies will enjoy the enthralling story and great action-based gameplay, and veterans will be excited to play the game just how they imagined it could be.