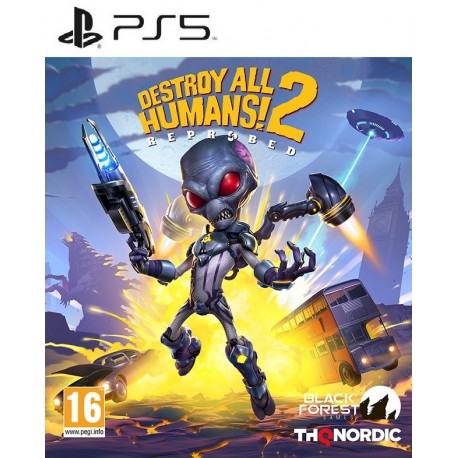 If I had to describe, Destroy All Humans! 2 – Reprobed in just one sentence, then I would say it is Mars Attacks...on acid, bold brash whacky, and the humor is dated, in-fact it is so dated that they have had to put a warning on the game that the humor in the game does not stand the test of time and will grind against our modern sensibilities, so it is just like, Mars Attacks in that perspective. After the success of the remake of Destroy All Humans! Back in 2020, Black Forest Games felt compelled to deliver another rebuild of the second part of the franchise to a whole new audience to whom the PlayStation 2 was just a mythical console that their parents used to play, Now is the perfect time to take a classic PS2 game and bring it up to modern-day standards of the next-gen consoles that have the power to provide the developers with crystal clear HD graphics that are visually stunning, they have gone from an early episode of the Scooby-Doo cartoons to a Toy Story style film leaping just one massive bound to the point where it does not seem like it was ever originally a PlayStation 2 game.

Now Posses Working Genitalia
Although there are drastic changes visually, Black Forest Games have made the wise decision to leave the gameplay and voice script exactly as they were, the Unreal 4 Engine has been deployed to make it smoother to play, but the actual controls and missions are just how you remember them. Our protagonist Cryptosporidium-138, let's just call him Crypto, I know it will never catch on, but I like it, anyway, Crypto is a small alien that came to earth to conquer it and farm human brains to suck up their DNA, after the events of Destroy All Humans!, which took place 10 years earlier in the 1950s a lot has happened, firstly our foul-mouthed Alien has been cloned and now posses working genitalia, (which is a sentence I thought I would never write), as the game is set now in the 1960s United States that was famed for its free love, drugs, civil unrest, and the Cold War, all of which play a large role in the game. Crypto's mother ship has been destroyed by the KGB and he and his sidekick Orthopox-13, who we will just call Pox from now on, have to work out why the Russians are targeting them and also stop their supply of a drug called Revelade that the Bolshevik's are using to subvert the minds of hippies and make them communist. Travel the world with our little alien hero as he explores different iconic cities around the world then smash, blasts, and destroys them, doing as much damage as possible to both the cities and their inhabitants. Each mission level also has a submission to help you increase your upgrades, but don't expect either to make sense, for example, one is taunting a secretary or another is placing hippie vans on top of buildings which will lead them to start a cult. Maybe the humor has dated a little, but I still find that it is a fun game to play and great entertainment, I recommend that you give it a go