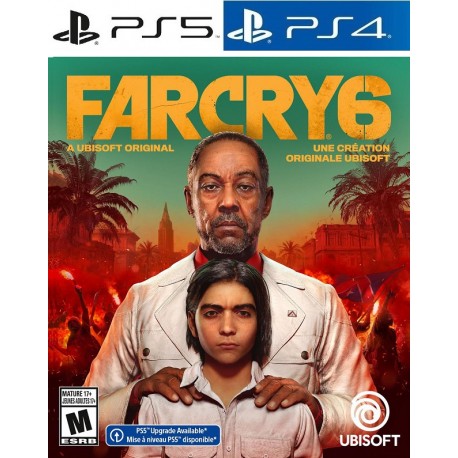 Play as Dani Rojas, a local Yara and become a guerilla fighter to liberate a nation.
Welcome to Yara, a tropical island paradise that is frozen in time. Far Cry 6 immerses players into the adrenaline-filled world of a modern-day revolution.
Join the uprising and fight back against the oppressive regime of the dictator Antón Castillo and his teenage son Diego, brought to life by Hollywood actors Giancarlo Esposito who has starred in both The Mandalorian and Breaking Bad and Anthony Gonzalez who was in Coco. Playing the role of Dani Rojas and become part of the journey of a military dropout turned guerilla revolutionary. To even the odds against Antón's Forces, you will have to adopt the resolver philosophy, employing an arsenal of unique and surprising new weapons, vehicles and animal companions to ignite a revolutionary movement that will burn the tyrannical regime to the ground. The latest addition to the Ubisoft open world First-Person Shooter series takes all of Far Cry's core elements, polishes them to a well buffed shine, and then packages them up in one hugely enjoyable adventure.

Bring Down Castillo's Corrupt Rule
We join the game as the main character Dani Rojas, who is attempting to escape from the brutal regime of Antón Castillo, after things go completely sideways, as the only survivor of the failed attempt to take flight you are washed ashore, and you quickly join the ranks of a small revolutionary group called Libertad, that are intent of bring down Castillo's corrupt rule, once and for all. Leaving the safety of the Libertad compound, you then make your way out into the massive open world of Yara which you are free to explore in whatever order you see fit. Along your journey you will come across a varied collection of characters, including an over the hill freedom fighter with the nickname El Tigre of The Legends of 67 who still has aspirations of finally bring freedom to Yara and an unpredictable explosive expert Jawson Brody.

Star Studded Voice Talent
Giancarlo Esposito's portrayal of Antón Castillo is incredible, he brings to life in both voice and face the most convincing baddie. With a calculating and steely manner, our anti-hero seems to have complete contempt for all those that surround him and will only tolerate the presence of his son Diego, who himself is torn between pleasing his dominating father or his empathy for the revolutionaries and their struggle. Another highlight of the game besides the star-studded voice talent that they have recruited is the addition of Resolver Weapons, these are weapons that are cobbled together or have an everyday use. The Tostador is a flamethrower and Discos Locos is an incredible CD-ROM disc launcher and that is before you get to the Supremo Weapons that have a back design that are even more devastating, some can heal you and others can tackle groups of enemies in one almighty blast like the Furioso, which hovers above the ground as it blast flames at the enemies below.

That Will Get You Hooked
Far Cry 6, as you would expect with any Ubisoft developed game hits all of its targets, with the dynamic, high-quality graphics that you now associate with the franchise, the realistic island paradise of Yara with its dense steamy jungles and panoramic mountain top views provide a great setting which you are totally free to explore. The Talented Hollywood voice acting brings the characters to life, it is performed by some of the most in demand actors of both film and television. The well-thought-out gameplay will get you hooked immediately, this is a game that is going to be an instant hit that all other FPS games will aspire to be half as good as. The Far Cry Franchise has always been the gold standard that others can only dream of. It's huge map and dynamic plot line will have you engrossed for hours. Can you tear down the brutal, corrupt regime and bring justice to the people of Yara? Only you can decide.
Viva la Libertad!