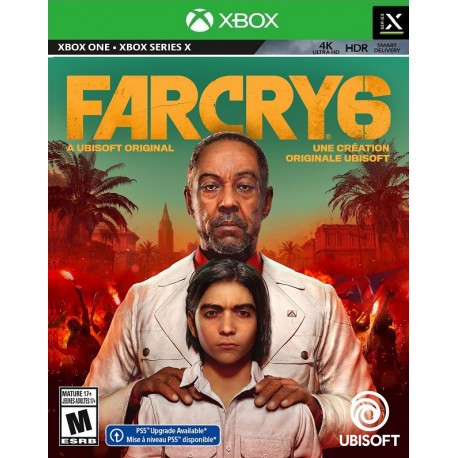 Play as Dani Rojas, a local Yara and become a guerilla fighter to liberate a nation.
Welcome to Yara, a tropical island paradise that is frozen in time. Far Cry 6 immerses players into the adrenaline-filled world of a modern-day revolution.
Join the uprising and fight back against the oppressive regime of the dictator Antón Castillo and his teenage son Diego, brought to life by Hollywood actors Giancarlo Esposito who has starred in both The Mandalorian and Breaking Bad and Anthony Gonzalez who was in Coco.
Playing the role of Dani Rojas and become part of the journey of a military dropout turned guerilla revolutionary. To even the odds against Antón's Forces, you will have to adopt the resolver philosophy, employing an arsenal of unique and surprising new weapons, vehicles and animal companions to ignite a revolutionary movement that will burn the tyrannical regime to the ground.
The latest addition to the Ubisoft open world First-Person Shooter series takes all of Far Cry's core elements, polishes them to a well buffed shine, and then packages them up in one hugely enjoyable adventure.

Explore the Different Sections of Yara
As the protagonist Dani Rojas you begin the game, you will get the chance to escape from Castillo's corrupt regime to Florida where you intend to spend your life enjoying the sun and beaches. During your attempt to escape things go tragically wrong and as the only survivor you wash up on a deserted beach and quickly join the ranks of a group of revolutionaries who are out to overthrow Castillo's regime. At this point of the game really gets going as you leave the safety of the Libertad encampment to explore the different sections of Yara, each area has its own group of likeable freedom fighters, there is an unconventional old man called El Tigre of The Legends of 67, who may be past it but still maintains the hope of revolution or the erratic bomb expert called Jawson Brody who is totally fascinated by explosives.

Resolver and Supremo weapons
There are some great additions that are new to the Far Cry franchise, these are called the Resolver and Supremo weapons and for the first time you can improvise homemade arms to devastating effect. The resolver category has such implements as El Pequeno which is a powerful Gatling gun and the Zeusito which fires EMP projectiles that can stop a vehicle in its tracks. Of the Supremo weapons, the Fantasma which has a rucksack shape and fires poison grenades that make their target turn on their own allies. These ingenious munitions can come in really handy when you are trying to tackle large groups of combatants or armoured vehicles.

Viva la revolution!
Far Cry 6, as you would expect with any Ubisoft game does not disappoint, with the fantastic graphics that you now associate with the franchise, the realistic island paradise of Yara, the dense steamy jungles and panoramic mountain tops provide a great setting and are ideal for ambushes or just to explore. Talented Hollywood voice acting brings the characters to life, performed by some of the most in demand actors of both film and television. Gameplay that will get you hooked immediately, this is a game that is going to be an example to all other FPS games that aspire to be the best, as the Far Cry Franchise always has been. It's huge map and dynamic plot line will have you engrossed for hours. Can you bring down the brutal regime and restore justice? Only you can decide. Viva la revolution!