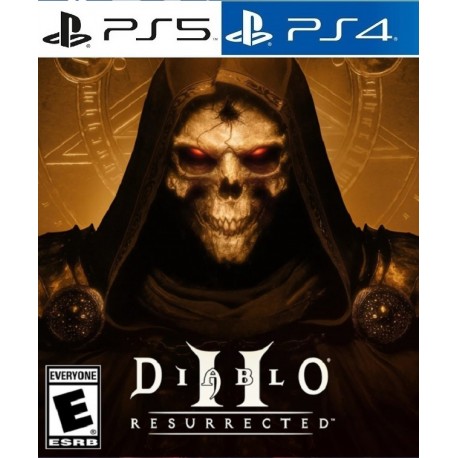 Diablo II: Resurrected is the definitive remastering of Diablo II and its Lord Of Destruction expansion, two of the hallmark entries in Blizzard Entertainment's Genre defining series of action role-playing games. Veteran players, as well as those who missed out when the original game was first released on PC over 20 years ago, can now experience Diablo II's timeless gameplay with updated modern visuals and audio that take full advantage of the PS4 and PS5

Experience the Terror
Ascend the Forgotten Tower, blaze a trail through the Jungles of Kurast and storm the gates of Hell to defeat Diablo himself. Then scale the peak of Mount Arreat to face Baal, the Lord of Destruction, in Worldstone Keep.

Choose Your Champion
Seven of Sanctuary's greatest champions await at the iconic campfire screen. The Amazon, Assassin, Barbarian, Druid, Necromancer, Paladin and Sorceress. Each is highly customizable with build and gear options for players to explore.

Battle Solo or Online
Diablo II: Resurrected can be played as a solo experience or up to 8 player co-op. Blow off some steam and claim a few ears by engaging in thrilling PVP duels outside of town.

This Revamped Console Version
On the whole the best part of this revamped console version of the PC classic is the detail that they have managed to use to craft the realm of Sanctuary alive, even though they have generated a whole new aspect to the game, by faithfully recreating all the characters and environments although playing it in a high resolution does not take away from that familiar, comfortable feeling that I had when I used to play the game. Not only the visuals are true to the original, but vastly improved, the soundtrack and SFX have been given exactly the same treatment. The background music of each area and every grunt and groan are instantly recognizable.

Takes You and Your Friends on an Iconic Adventure.
Fortunately Blizzard Entertainment and Vicarious Visions have developed a game that can stand alone so if you are new to the franchise you don't have to worry about catching up as the important information that you get when playing the first in the series, Diablo is retold in the first chapter and illustrated by detailed cutscenes to bring you up to date. Playing solo is a good experience, but playing with your friends gives you an advantage as you can mix together the long range and melee attacks to create a formidable force that can conquer any beast or horde of monsters by working together as a team.
Multiplayer Mode takes you and your friends on an iconic adventure.

The Best Game of its Genre
Diablo II: Resurrected has a classic storyline and has become renowned as the best game of its genre, it has become famous with the RPG community for its fast pace, varied difficulty settings, the ability to change characters if the one that you have selected just can't do the job. Loads and loads of valuable unique loot to collect and the ability to upgrade the character's qualities using a skill tree with an endless amount of variables in between, but added to that now is high quality graphics, superb sound and a completely true reworking. If you have played Diablo II: Resurrected before then this is a chance to play it as it was meant to be played and if this is your first time you will be swept away in a wonderfully created world.