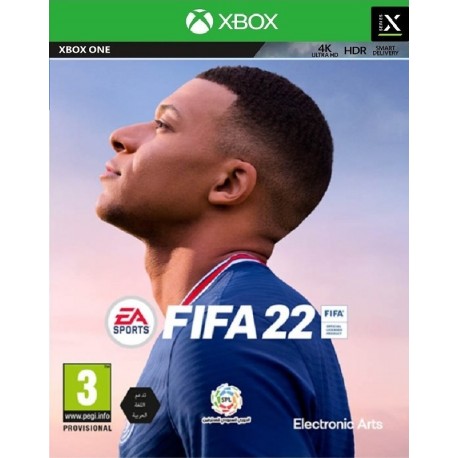 Powered by Football, EA SPORTS FIFA 22, brings the game even closer to the real thing with fundamental gameplay advances and a new season of innovation across every mode.
New gameplay features in FIFA 22 gives you more consistency between the sticks with a goalkeeper rewrite that brings more composure to the most important position on the pitch, alongside new ball physics, explosive sprint that better matches the acceleration of the game's quickest players, and new attacking tactics that let you take control of how your team plays.

More Than 30 leagues
In Career Mode, live out your football dreams as you create and manage the game's newest club to glory. VOLTA FOOTBALL rewards you for your flair with restyled small sided gameplay and new ways to play and progress each season. Get the squad together in Pro Clubs with enhanced team customization and updated progression that puts you in control of your Virtual Pro's development, and welcome back some of footballs most memorable players as new FUT Heroes in the FIFA Ultimate Team with a redefined competition structure that makes testing your skills against other players more accessible. However you play, enjoy unrivaled authenticity everywhere with over 17,000 players, 700+ teams and more than 30 leagues including the UEFA Champions League, CONMEBOL Libertadores, and the brand new UEFA Conference League that are only available in FIFA 22.

The Most Realistic Football Game Ever!
Yes there are three things in life that are constant, death, taxes and a new FIFA annually. Well the wait is over as FIFA 22 is here, EA SPORTS have once again managed to deliver the most realistic football game both on and off the pitch, Constantly improving and upgrading the gameplay is what EA SPORTS have become renowned for, and FIFA 22 delivers in spades. There have been changes to improve and expand your player pool, where with FIFA 21 it was all about pace, and you were likely to only use the most rapid players in your squad, with FIFA 22, although pace is still useful when you are trying to turn over a loose ball, but when a defender makes contact it is a lot harder to get past him. The same with passing, it is no longer easy to make short passes, there has been an increase in the need for accuracy so your Skilled and One-Touch passes have to be spot on or the ball will just be constantly conceded, this slows the game a little but also brings the less pacey players like Jordan Henderson who can control the pace of the game, but are not that rapid to the fore and will get a lot more playing time. Longer balls have now become easier to pull off, and the chipped through ball makes a welcome comeback as a way of getting in behind the defense.

Unique Fantasy Dream Team
Because the game has slowed down slightly, Dribbling and Agility are now key factors when compiling your team. But the biggest change come to the goalkeepers, who are much harder to beat whether you are one-on-one or are the victim of one of the keepers incredible reaction saves, which will have you hurling your controller across the room in frustration. It is refreshing and rewarding to have to use all your skill to get past the man in the sticks. Ultimate Team and Career Mode let you put together your own unique fantasy dream team and your very own elite football club to control, including even customizing their kit.

Impressive and Fresh
Overall EA SPORTS have kept the latest edition of the iconic game true to its predecessors, but as we have become accustomed to, tweaked both the gameplay and the fantastic career mode, to which they have added Create a Club giving you a whole new level of control over the day to day running of an elite football club. There are some old favourites like VOLTA that have been given a twist with the introduction of the Skill Meter that gives your player a unique ability. FIFA 22 is an impressive and fresh take on the franchise and is still the gold standard of sporting games.