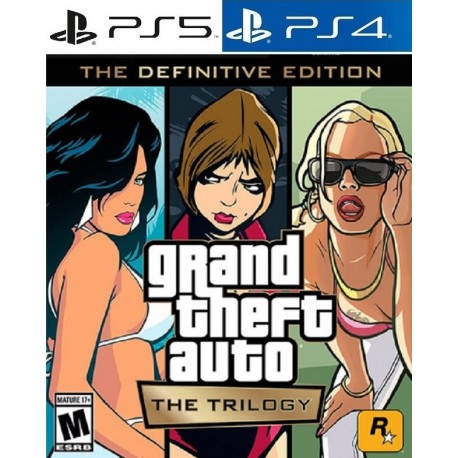 The Definitive Edition includes: Grand Theft Auto III: It all begins in Liberty City. With the revolutionary freedom to go anywhere and rob anyone you want, Grand Theft Auto III puts the epicenter of the criminal underworld at your fingertips... if you have the guts to take it. Grand Theft Auto: Vice City: Welcome to the 80s. From the decade of long hair, excess and pastel suits comes the story of a man who rose to the top of the criminal world. Grand Theft Auto returns with Tommy Vercetti's story of betrayal and revenge in a tropical city brimming with neon, excess and possibility Grand Theft Auto: San Andreas: Five years ago Carl Johnson, aka “CJ”, fled the turmoil of Los Santos, San Andreas a city ravaged by gangs, drugs and corruption. We are in the early nineties, CJ has to come home. His mother is murdered, his family falls apart, and his childhood friends go astray. Returning to his neighborhood, a pair of crooked cops frame him for murder, forcing CJ to embark on a journey that will take him across San Andreas to save his family and gain control of the streets in the next installment of the series that changed everything.

Performance Increases the Frame Rate
Three excellent games in one brilliant package. All new and improved lighting that when night falls in the deadly city you can see the neon lights reflecting off the bonnet of your car and the surfaces in the street. The foliage and trees have been taken directly from GT5 and look stunning bathed in pure neon. There are two different graphics options, with Performance increases the frame rate to 60fps on the next-gen machines, and Quality provides a little extra detail of its visual appearance as it runs at 30fps. As part of the remastering process, development studio Grove Street Games moved each title to an Unreal Engine and utilized a mixture of AI and in-house artists to upgrade every texture. In the case of the PS5, this results that textures look fantastic in 4K

Something for Everybody
The main enhancement is not through its graphics or audio but by reconfiguring the controllers to adopt the advanced GTA V settings, which get better use out of the right thumb stick and make them easier to master and have a more modern feeling. The mini maps have also had some new additions, like bringing the GPS from GTA V to the older games for new players who have not yet committed to memory the city map. Rockstar have designed the perfect bundle for those who are taking their first steps into the GTA world. All three of the most iconic and renowned games, improved and refurbished, with fresh characters to venture through these dangerous streets with, so even if you are a GTA veteran the is something for everybody.