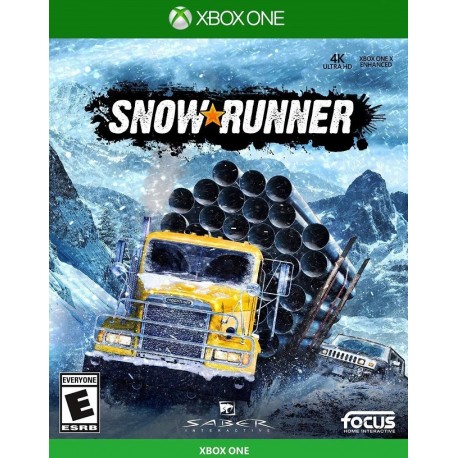 SnowRunner Xbox Series X|S & Xbox One is the latest installment in the Spintires series, a follow up to the successful MudRunner (2017), and off-road driving simulation video game developed by Saber Interactive and published by Focus Home Interactive on 28 April 2020 for Microsoft Windows, and Xbox Series X|S & Xbox One One. SnowRunner is probably the best off-roading videogame. It can be played single-player, but also co-op 4-players multiplayer.
This may seem like a niche game, but those who will play it will fall in love with it. Players find themselves in a remote wilderness sandbox where they are tasked with various missions and have to perform a number of challenges and daring “contracts”. SnowRunner is a vehicle simulation where players find themselves behind the driving wheel of some of the most powerful off-road vehicles in isolated extreme open-world environments. The essential thing is not getting stuck. There is no particular storyline, but without noticing, the sandbox-to-play idea will hook you up.
SnowRunner is better than previous games and brings substantial innovation and solid improvements over the previous release to take the game to another level. There are new vehicles and environments, but also an overall improved game engine. It is amazing to drive such impressive vehicles as those of SnowRunner. The experience offered is unbelievable, as when you’re moving your truck to cross some streams and you can actually feel the water, or when the muddy ground is deforming under the wheels of your heavy vehicle. There are no other games to provide these experiences at this time. Players who are in off-roading game space may have played Dakar or Overpass, but these are far from the physics offered by SnowRunner. If there is one aspect where Saber Interactive excelled, this is the physics area that they nail it.
The maps are not extremely large, but they are beautiful and bring players closer to some remote areas of the planet that stands out only through their wild landscapes and extreme circumstances. Players will drive through some far-off parts of Alaska – like White Valley or North Port, untamed areas of Michigan – such as Black River or Smithville Dam, but also through Canada and Russia, in Taymyr area, in the Far North Russia region of Siberia, or Kolskiy, on the Kola Peninsula, inside the Arctic Circle.
The vehicles available are all heavy machinery built for the dangerous terrains where players dare to drive. There are some powerful off-road vehicles, like ANK MK38, or Freightliner M916A1; scout or reconnaissance vehicle, like Hummer H2 SUT, or TUZ 420 "Tatarin"; heavy trucks, like Azov 42-20 Antarctic, Navistar 5000-MV Tractor, or Caterpillar 745C; heavy-duty tracks, like Caterpillar CT680 or FleetStar F-2070A; and finally highway vehicles, such as Ford CLT9000 or GMC MH9500. These are not ordinary vehicles; some of them are extremely rare and gigantic pieces of machinery. Over 40 vehicles are readily available and more will come with DLCs.
SnowRunner is an atypical video game, there is simply nothing else quite like this off-roading title. The vehicle physics is simply unbelievable, and keep in mind that you are driving some extreme vehicles. The real-time deformation of the terrain is something else worthy of praise, as well as graphics and open-map sandbox concept that is quite unique.