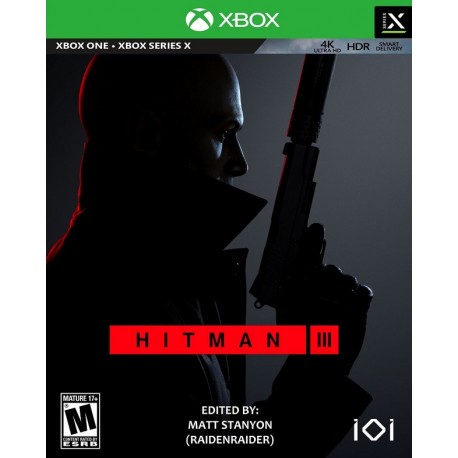 Hitman 3 is the breathtaking conclusion to the World of Assassination trilogy. Agent 47 makes his return as the iconic ruthless professional who is about to take on the most important contracts of his distinguished career, the result of which could change the world as we know it. In this globe-trotting adventure and experience some of the world's most exotic locations that are full of creative opportunities. IO Interactive's award-winning Glacier technology powers Hitman 3's tactile and immersive game system offering you unprecedented player choice and replayability. Supported by his Agency handler Diana Burnwood, Agent 47 joins forces with his long-lost friend Lucas Grey in their most important mission to eliminate the partners of Providence, as the mission progresses they have to adapt to new situations that unpredictably arise.

Brand New Tools, Weapons, and Useful Items
Hitman 3 is the only place to play all three games of the World of Assassination trilogy, all the detailed locations of Hitman and Hitman 2 can be imported and played within Hitman 3 at no additional cost for owners of the existing games, plus your progression from Hitman 2 can be carried over into the third game in the iconic series at launch. With brand-new tools, weapons, and useful items now available to help you plan your approach to every mission, such as the camera that can be used to remotely access locked electronic doors or as an investigative device to collect intel. There are various ways to interact with the stunning environments that can now unlock powerful shortcuts, as the game rewards you for exploring with exciting opportunities for a future playthrough.

The Best Looking Entry in the Series
Hitman 3 has a placed more emphasis on the storyline and overall cinematic experience which means that the game is the best designed in the whole series, it is not just the stunning graphics, which are quite incredible, but also with regard to the stylish animation that makes the cut scenes really, so lifelike and with an unforgettable soundtrack that is used to deliver the perfect atmospheric mood on each of six brilliant levels. Some people might be worried that the game would not have the clever humor that the Hitman franchise is synonymous with, but they can relax as IO interactive have it by the bucket load, there are exploding golf balls to take out your target and some great chit-chat between various NPCs that pop up in every level that is sometimes laugh out loud.

Nothing Short of a Masterpiece
It is rare that a trilogy of games manages to still advance and stay fresh and interesting as well, but Hitman3 does this brilliantly from the first game to the last, but rest assured that the Hitman World of Assassination series comes to its conclusion in fine style. On its own this is a brilliant stealth game, it is a very replayable, clever, and exciting title that mixes in completely new ideas, refine the gameplay from the first two games, and happily brings the trilogy to a satisfying end. When you add to that the ability to play each of the first two offerings that have been greatly enhanced and upgraded to the gold standard that Hitman is now famous for, means you have now got what must sincerely be the greatest gaming experience, each entry on its own merits is good but combined they are nothing short of a masterpiece.