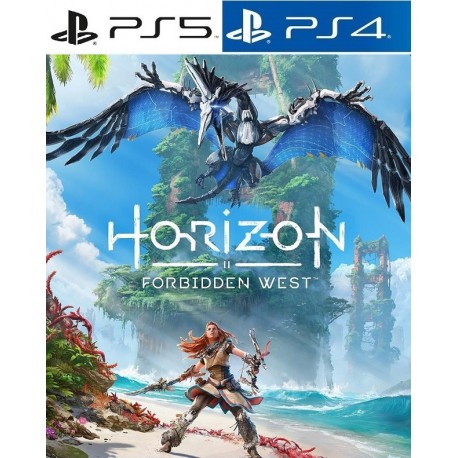 Aloy is back, join him as he returns to brave the Forbidden West, The second installment of the Horizon series of games, a mysterious and dangerous frontiers where new threats are waiting. As you return to the distant future, where you can explore distant lands, face larger and more intimidating machines and uncover astounding new tribes as you discover the apocalyptic world of Horizon.

The earth is dying, furious storms and an unavoidable catastrophe are wreaking havoc on the remnants of the human race, a few isolated tribes, as terrifying new machines prowl its boundaries, all life on earth is facing extinction and not a soul knows why.

Aloy is the only one capable of uncovering the truth behind these threats, and reimpose order and equilibrium, as he makes his way through the remote lands he will join forces with old companions, make new alliances with novel factions that at war, unearth the heritage of a forgotten past, while endeavoring to try and stay ahead of a new invulnerable adversary.

Horizon Forbidden West is a sensational follow up to one of PS4's most popular games with a strong narrative and memorable characters that are just some of its many attractions, a narrative that contains surprises and goes along at a decent rate, its combat has been redeveloped augmenting its weapons and types of ammunition, making exterminating either humans or the destructive new machines a much more enjoyable experience. Together with a more realistic and natural world that is more detailed than its predecessor. The game play, sound and graphics have all been improved, creating a PS5 instant hit.

As well as the fascinating new story and enhanced gameplay, one of the most impressive aspects of the second installment has been the evolution of its graphics in comparison to Horizon Zero Dawn. It's not only the characters that have benefited from an increased level of graphics quality and incredible realism but also in the detailed texture of trees, plants, rocks, and even the grass casts life-like shadows on the ground, the waters flows in such a realistic manner and even the way the vegetation moves when it is stepped on is so impressive. Gorilla Games have out done themselves this time, with twice the level of detail and twice the frame rate. The PS4 version uses a tier 1 VRS to further improve performance done in software to handle vegetation and motion. (The UI is rendered at native 1080p on PS4, native 1800p on PS4 Pro and in the PS5 performance mode, and native 4K in the PS5 resolution mode.)

Horizon Forbidden West takes all the finest aspects of the original adds and improves them, creating a vastly impressive wilderness game, walking from the interior of a building straight out into the outdoors seamlessly, no loading screens to slow down the gameplay. Gorilla games have added a hang glider to Alloy's toolkit and have increased the number of handholds for him to grip on when he climbs, he can scale mountains until he reaches the pinnacle which affords you great advantages, such as a tremendous view, the upper ground over enemies and the ability to glide over valleys and green pastures,

As for breathing below the water when swimming, once you have unlocked the tool that permits you unlimited breathing underwater, you can explore the sunken world of unusual marine life and the crumbling decayed buildings that intersperse the detailed, submerged undersea world. Fantastic graphics, intense gameplay, a captivating and intriguing story line all make this game an instant modern classic, Gorilla Games have achieved everything that they set out to do plus more, which means hours of enjoyment for you.