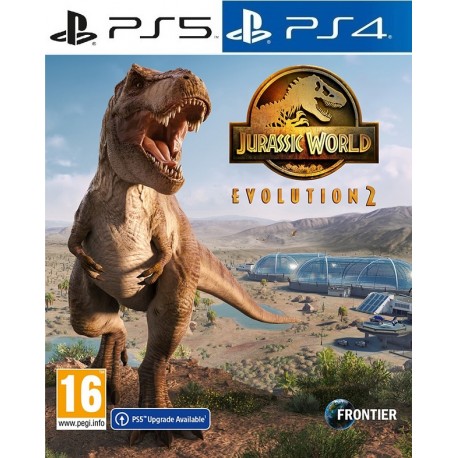 Jurassic World Evolution 2 is the long-awaited follow up to Frontier's visionary management simulation from 2018, Jurassic World Evolution, with a whole new storyline for this fresh campaign, which has the voice of talent from across the broad range of the Jurassic movie franchise, inventive new attributes, including four all-new game modes, and an enlarged inventory of breathtaking dinosaurs.

An Original Story From the Jurassic World
In campaign mode you will quickly learn what is needed to become an expert in park management, an enthralling, unique storyline puts you at the center of the fallout from the devastating events of Jurassic World: Fallen Kingdom. Work side by side with the iconic characters from the Jurassic World movies including Dr. Ian Malcolm (voiced by Jeff Goldblum) and Claire Dearing (voiced by Bryce Dallas Howard), and lead them on a mission to restrict, preserve and most of all contain the destructive beasts as they run riot across the USA.

Create Your Own Jurassic World
You are in charge, use your intuitive management tools and creative options, Build and customize new structures and recruit new scientists. Shape your dinosaur park to satisfy the needs of both your visitors and your prehistoric creatures. Let your creative side loose in the Sandbox Mode, or test your abilities in Challenge Mode, where you traverse different locations and deal with environmental disasters.

Play Around With the Chaos Theory
Have you ever wondered“ What if”? You can immerse yourself in your favorite scenes from all the five classic Jurassic Park and Jurassic World films and see what would have happened if you were the one in charge, and we can see how well your leadership would have worked out in the Jurassic World.

Meet Some Amazing Species of Dinosaur
More than 75 prehistoric animals come alive and jump out from the screen in Jurassic World Evolution 2, especially the much asked for marine and aerial reptiles. Where Evolution only had the Pteranodon. Evolution 2 has a plethora of flying species like the Tapejaro, Geosternbergia, and Dimorphodon all new to Jurassic World and all need to be housed in aviaries, the same goes for the marine reptiles from the gigantic Plesiosaurus to the ancestor of the swordfish the Ichthyosaurus are all new to the collection and visually breathtaking, but they will need their special enclosures. Some of your all-time favorites are also returning, including the monstrous Indominus Rex and the clever and troublesome velociraptors.

Like a Cherry on Top
You can rely on Frontier Games to not only take a classic game, but also improve it, make it easier to control, and then give it a huge twist with the unique extra content like a cherry on top. A brilliant game that will provide hours of enjoyment with a nostalgic reliving of unforgettable moments from the film franchise and topped off with a beat-the-clock challenge. If you want a lot of addictive park management gameplay for your money, then Jurassic World Evolution 2 is the game for you to invest in.