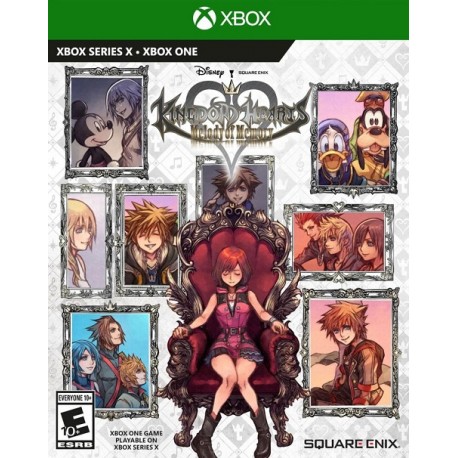 The main idea behind Kingdom Hearts Melody of Memory is a combat rhythm game, with the objective being to strike all enemies and objects that are in your way with brutal blows and a variety of skills, you start with Goofy, Donald, and Sora but as you go further into the game you can unlock other classic trios from all the games in the franchise, each character has the same gameplay if you do not land your strike your enemy will cause you damage from their attacks and this will also reset your combo count. By using LB, RB, or A, you can hit any solo enemy. But as there are times when you will face multiple enemies you will need to learn to press a combination of two or three buttons and as you do this you will also have to jump to avoid incoming attacks (B), jump to take out airborne attackers (B+A, LB or RB), you can even jump and fly to collect stringed music notes (press B and keep it held down), and lastly use your magic on your aggressors by tapping Y just at the right moment which can be testing, to say the least, it requires you to get into a certain rhythm to master it.

Music From Every Edition of the Franchise
As the game is a little easier to play than the usual RPG gameplay that Kingdom Hearts is renowned for, Indie Zero has placed a little more emphasis on difficulty by adding extra tasks before you can proceed to the next level. When a song is completed there are 3 extra objectives, each rewarding you with a star on accomplishment, which you collect up as you progress until you have enough of them to advance past a locked gate to the next level. So sometimes you might have to go back to a particular song to collect your missing stars, If you manage to get the highest score and hit added targets then the drop rate of items and collectibles increases, and rewards for getting 3 stars on a certain song include potions to restore health or music sheets. As the music is from every edition of the franchise that has been around for 20 years there are bound to be some of your favorite tunes to play, Classics like Sanctuary, Face my Fears, and Simple and Clean are supported by remixes of other great music like the new upbeat version of Dearly beloved that you get the pleasure of hearing again right at the start of the game.

The World's Most Popular Female Video Game Composer
With over 140 songs to enjoy and 20 characters to experience and upgrade, fans of the genre will be kept busy for quite some time. Not only do you play the iconic Kingdom Hearts music, but there are also some great Disney originals thrown in as well, who can forget A Whole New World from Aladdin or the classic Circle of Life from the Lion King, or my favorite Beauty and the Beast which add to not overwhelm the brilliant songs of Yoko Shimomura who worked on every release of the Kingdom Hearts series and is now considered the world's most popular female video game composer. Kingdom Hearts is a wonderful way to recap the entire series in a fun and entertaining way, and for newcomers is a great way to get up to date with the epic stories.