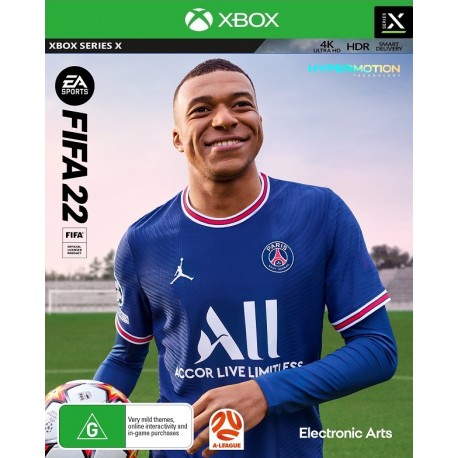 Powered by Football EA SPORTS FIFA 22 on Xbox Series X|S moves the game forward with the groundbreaking next-gen HyperMotion technology that elevates every moment on the pitch.
HyperMotion integrates advanced full-team mocap data and machine learning to heighten the gameplay of every match in FIFA 22, harnessing the power of the next generation consoles to deliver the most realistic, responsive and fluid gameplay experience that they have ever built. FIFA 22 brings a new season of innovation across every mode in the game. Enjoy more consistency between the posts with a complete goalkeeper rewrite that brings more composure to the most vital position on the pitch. Live out your football dreams as you create and manage your custom club to glory in the fantastic Career Mode, get rewarded for your flair with restyled gameplay in VOLTA FOOTBALL, welcome back footballs most memorable players as FIFA Ultimate Team Heroes, and feel the atmosphere of the next big game with the most immersive match day experience ever seen in EA SPORTS FIFA.

Lifelike Player for Player Rendering
With this new addition to the FIFA franchise, we are introduced to the latest technology to grace the gaming world. HyperMotion uses over 4000 new animations to create a more realistic, intuitive and unique gameplay. The lifelike player for player rendering, It is powered by a full size 11 vs 11 motion capture which has been used to record all the different on field player movement, reactions and the subtleties which is then used to enhance the Moment to Moment gameplay making each game an individual experience that captures all the dynamism of an actual match. HyperMotion is a real step forward as EA SPORTS once again lead the market with innovation.

Control in Midfield
With FIFA 21 the emphasis was on speed and short passing to either out pass the opposition in midfield before slipping you most pacey player through for a one on one with the keeper, well it is time to retrain your muscle memory as it has become a lot harder to complete short passes as the level of accuracy needed has been vastly increased, with priority being placed on control in midfield and utilizing your players dribbling skills to dominate your opponent, obviously pace will always be a factor as the difficulty of long balls and chips over the top, so your style of play will have to be less Manchester city who kill of their enemy with death of a thousand passes and more Liverpool, who can pass their way through midfield but are not adverse to a long ball over the top every now and again. This will bring a whole new style of play and revolutionize everything that you have become accustomed to.

The Biggest Improvements to FIFA
The Create a Club feature, that is in the Career Mode is one of the biggest improvements to FIFA 22, own your own club, take control of every part of, launching and then the day to day running. So you can choose the kit, design the badge, select and form a squad of elite players, decide on a realistic budget and even construct your very own stadium to play in. when you are ready you can then select whichever league you want to compete in and replace any established team that you want. With a completely new Skill Tree that as you increase your level, you will be rewarded with either Dribbling, Shooting or Physical abilities that makes each player individual and will boost both yours and your teammate's performance.

Addictive Gameplay
Innovation constantly drives EA SPORTS, whether it be in the graphics department that runs at an impressive 60fps and is available in stunning 4k with the Xbox Series X|S, or the gameplay with the introduction of HyperMotion and the all new Career Mode additions. FIFA 22 is comfortable and familiar in certain aspects, but brand new and totally fresh in others. Taking us into another fantastic season of addictive gameplay and keeping EA SPORTS very firmly on top of the other games that are only a pale imitation.